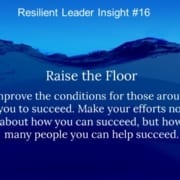 I recently watched the Best Picture award winner, Midnight Cowboy with Dustin Hoffman and Jon Voight. The final scene is very touching. The two men are riding a bus to Florida to get out of the grimy New York street life. Overplaying the action is Harry Nilsson’s Everybody’s Talkin’. The song’s opening lyrics – Everybody’s talking at me. I can’t hear a word they’re sayin’. Only the echoes of my mind. It made me think about a recent business meeting. Six people at the table with six agendas. Each participant with one mouth and no ears. Side conversations took over the general discussion – everybody was talking at me. At the conclusion – well, there really wasn’t a conclusion – the meeting just ultimately ended. At the end, I was unclear what direction we wanted to follow. The messages were mixed in my mind. The intentions of the team were chaotic. Is your business chaotic or is it chaos theory?

Chaos in a system was discovered by American mathematician Edward Lorenz. In the late 1950s and early 1960s, Lorenz modeled the weather using twelve differential equations. He wanted to save time on one occasion and started the program in the middle, rather than at its initial conditions, and stored computer data to three decimals rather than the usual six. Instead of getting an expected close approximation to his result, Lorenz got a very different answer.

Lorenz rationalized that a small change in the initial conditions can drastically change the long-term behavior of a meteorological system. He called this phenomenon the “butterfly effect.” In its extreme case, Lorenz contended it was possible for the flapping of butterfly wings to cause a massive storm a half world away. His 1972 paper “Predictability: Does the Flap of a Butterfly’s Wings in Brazil Set off a Tornado in Texas?” originated the term Butterfly effect. Based on his results, Lorenz stated that it is impossible to predict the weather accurately.

Did we seriously expect endless studies to tell us anything other than when the weatherman predicts a hurricane I should look in my front closet for the snow shovel? Heck No.

Can you imagine that this happens in organizations? Can you imagine how the butterfly effect can move a company off its course? It happens virtually every day. One set of directives are passed down through the organization ranks to the next generation where they are interpreted then passed down one management level where pieces are missing and by the time it gets to the mail room the message is nothing like when it left the boardroom.

This is the same telephone game we’ve played since we were children. You and your kindergarten friends sit cross-legged in a circle. One child whispers a sentence to the next. The objective is to repeat exactly what the one before said. Exactly what they said. Do you remember how this worked out – I do – miserably. The teacher would whisper – “Sally wears red shoes in the classroom” and the sentence would make it back “Bobby pooped in the bathroom sink.” Or some variation. The difference between kindergarten and organizations is that there is a political component to the conversation.

It is hard to ignore that there are personal motivations in the corporate telephone game. I know that the resilient leaders listening attempt to steer from these obstacles, but it is challenging. Political and self-serving motivations skew and obfuscate corporate messages delivered from the board room.

Johnathan Swift wrote that “Falsehood flies and the truth comes limping after.” It is sad, but it is true and to be expected that nearly every organization suffers from the butterfly effect in corporate messages. This chaos is set upon organizations with the intention to disrupt the unity and harmony of an organization. Chaos is a devious beast because it attacks us from the inside and cannot be fought with normal weapons.

I am now going to give you my unscientific, non-peer reviewed, resilient leader theory on chaos. Are you ready? Got your pencils out? Here it is: Fly in Orlando. You heard it. Fly in Orlando. This theory has been endorsed by one highly-motivated, Jamaican born former Toronto Argonaut.

The theory is simple. Here’s how it works. Resilient leaders often face the urge to pass along data and information they gather throughout their networks. Some of this information is valuable others are just plain crap. For those organizations who are getting mixed messages from the leaders. Conflicting corporate messages that make your actual objective ambiguous?

You need to Fly in Orlando. This theory does not include mouse ears and hours in a queue with screaming children. But, you should consider flying in Orlando – Bowen. Orlando Bowen. Orlando is a game changer equipping people to get off the sidelines and make a difference. Orlando’s message of One Team – One Voice – sends a message that organizations should rally to a clear message to move forward. A clarion call for the objectives and intentions of organizations. Orlando speaks to corporate audiences with a passion reserved for rabid zealots. Yet, within seconds he snaps an audience to attention with his shout “ONE TEAM”…you were supposed to respond “ONE VOICE”  Let’s try it again. “ONE TEAM” “ONE VOICE” There, that’s better.

Too often our corporate directives – our projects devolve into corporate Towers of Babel. Quick show of hands how many of you are involved in projects where it feels like the left hand doesn’t know what the right is doing. Hmmm? My Magic Mirror shows me that quite a few of you have both hands raised.

The Tower of Babel you may remember from the Book of Genesis was one of the world’s first major engineering undertakings and one of the world’s first management failures. God advised them that as long as they are one people with one language, nothing would be impossible. However, the language and semantics changed. Teams couldn’t talk effectively with each other and consequently lacked coordination. This deteriorated relationships, resulting in jealousies, with different groups isolating themselves. And the project failed. They became masters of babbling in Babylon.

If only the project manager could Fly in Orlando. ONE TEAM – ONE VOICE. Resilient leaders need to find how to communicate in a unifying voice.  One clear voice that listens to all and can speak for all. One voice that is unwavering in its intentions. One voice that can raise the bar and raise the floor at the same time.

Folks, thank you for listening to Swimming in the Flood. Resilient leaders face challenging currents and it is tough navigating, but with one tack or another we can get there together. You can find more podcasts and videos on my website at www.trenttheroux.com. Music today is from Bensound. If you enjoyed today’s show, please tell a friend, share the link on your social network…subscribe.  I would be happy to discuss speaking at your next conference or event. Just write to me at info@trenttheroux.com. Send me a quick message if you have an idea that needs to be looked at through a resilient leader lens.  Thanks again for listening. I look forward to getting together next week.