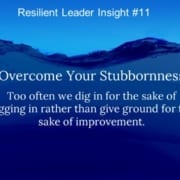 Have you ever ridden a mule? Maybe taken one down the east rim of the Grand Canyon for adventure? How would you react if the mule just stopped dead in its tracks? Would you try to push him down the rim or pull him back up to the top? What if you were the mule stuck in its tracks? Who would be able to move you?

A mule is a cross breed between a horse and a donkey. The mule gets its athletic ability from the horse and its intelligence from the donkey.  (psst. Don’t tell Shrek this.) Mules have been labeled stubborn for centuries, but it is really only an abundance of common sense and a strong desire for self-preservation that might make them inclined to resist. Self-preservation. Inclined to resist. Hrmph. Sounds like a few managers I know.

Some of our most influential and popular managers can be mules. The stubbornness is often rooted in their belief that they are right. That their methods are right. And that opposing opinions are personally motivated.

One of the most stubborn men I ever learned about was General Douglas MacArthur. MacArthur famously said “I shall return” as American forces were being driven out of the Philippines by the Japanese. Did you notice that he said I versus we? That’s a concept for another episode. MacArthur’s troops retreated in one of the early humiliations of the pacific arena during World War II. As promised, MacArthur “returned” and liberated the Philippines and ultimately accepted the surrender of Emperor Hirohito ending the Second World War.

MacArthur was called to duty again during the Korean War, but this time the shine was off the apple. Following a brilliant tactical maneuver and landing at Inchon forcing the North Koreans to scatter from Seoul, MacArthur repeatedly miscalculated the impending troop buildup of the Communist Chinese. MacArthur received numerous reports of this growing issue yet was steadfast in deciding that they would not influence his path. At the same time he began to ignore the directions given by President Truman to seek a negotiated truce.

MacArthur labeled this as appeasement and began to press to have more troops, expand the fight into China and utilize nuclear weapons. This manager’s focus changed from one of a resilient leader to that of self-preservation, inclined to resist, a mule. Following public statements made by MacArthur about the “appeasement” strategy and interpreting orders in a loose manner, Truman relieved MacArthur of his command.

The story was a tragedy for the American military, but highlights a problem we often see in business; there are managers who operate outside the lines of authority and need to be reckoned with. How can we as resilient leaders manage these mules without becoming mules ourselves?

I want to go off on a tangent. I shouldn’t call this story a tangent because it directly relates to how much of a mule I can be. You can save your snide remarks that you already know I’m a dumbass because in this story I am clearly a mule.

To no one’s surprise, I struggle at spelling. It’s a good thing that my name has only one syllable or there could potentially be trouble. My mother would often quiz me about random topics when we were on car rides or when she made me tag along while she went shoe shopping. Looking back, it was like a version of Elementary School Jeopardy. The questions could be about science, or history, or geography or spelling. I remember one particular car ride where my mother had the spelling of the word wrong and I had the right version. But, she wouldn’t let it go. She insisted that I was wrong. The word was meadow. “Trent, spell meadow.” “M-E-D-O. Meadow” “That’s wrong. Try again.” “M-E-D-O-W. Meadow” “That’s still wrong. Try again.” “It’s not wrong. Meadow ends in a W.” “Well, that’s right, but you still spelled the word wrong.” “M-E-D-O-W” “Wrong” “M-E-D-O-W” As if changing the inflection on the letters would make them correct somehow. “That’s how you spell meadow, Mom. You’re wrong.” “Try again.”

This went on for quite a while. And our argument got heated. Or at least as heated as an 8-year old who was afraid of his mother’s backhand would let it. “M-E-D-O-W” “Trent, the word has an A in it.” “An A? Where?” I tried to go through all the combinations where the A would fit and couldn’t get there in my head. “M-E-A-D-O-W” “M-E-A-D-O-W? That’s Me-A-Dow. Not meadow.” The argument continued. The humiliation grew as my mother would tell the store clerks – “will you listen to my son try to spell meadow? It’s hilariously pathetic.”

I am now going to give you my unscientific, non-peer reviewed, resilient leader theory on management stubbornness. Are you ready? Got your pencils out? Here it is: Use the revolving door. You heard it. Use the revolving door! This theory has been endorsed by at least one tiny piece of silicon that can manage over a billion processes in one second.

The theory is based on a company in the 1980s that was number one in its market. Dominant in its market. However, it was encountering increased competition from Japanese companies who were producing better performing products at a lower price? Quick show of hands. Anybody know this company? I will give you a tiny hint. They were the market leader in memory chips. My magic mirror tells me that not many of you are raising your hands. The answer is Intel. Yes, that Intel. During the 1980s they were memory chips. However, during the 80s Japanese company’s market share doubled from 30% to 60%. A debate raged inside of Intel. One camp wanted to leapfrog the Japanese in manufacturing. Another camp wanted to develop an avant-garde technology in this space. A third camp wanted to double down on the existing strategy by serving specialty markets.

The debate continued with no conclusion and they were losing more and more money on their memory business. They were being a mule.

After one meeting, Andy Grove, the CEO asked Gordon Moore, Intel’s chairman and the developer of Moore’s Law, “If we got kicked out of the company and they brought in a new CEO and Chairman, what do you think he would do?”  Moore answered without hesitation, “He would get us out of memory.” Grove thought about it and said, “Why don’t we walk out that door, come back in and do it ourselves?”

Here are the two people running a billion dollar business saying that they were willing to shed their company’s main source of revenue and invest in a small starting microprocessor business.  That takes some serious courage and willingness to change. In business schools, it’s called the revolving door test. The saw their environment for what it was and saw that they needed a change to grow.

Sometimes riding a mule will get you to the bottom of the canyon – sometimes it will give you a pain in the ass – or my ass. If you find yourself acting like a mule, get in your car and drive to your nearest Hilton Hotel take one revolution through their revolving door and think through your problem again.

Folks, thank you for listening to Swimming in the Flood. Resilient leaders face challenging currents and it is tough navigating, but with one tack or another we can get there together. You can find more podcasts and videos on my website at www.trenttheroux.com. Music today is from Bensound. If you enjoyed today’s show, please tell a friend, leave a comment…subscribe. I would be happy to discuss speaking at your next conference or event. Just write to me at info@trenttheroux.com. I look forward to getting together next week. And from me to you I wish you some bad luck. See ya.

12. The Real Mob
Scroll to top