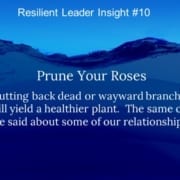 Welcome to Swimming in the Flood; a podcast where we develop resilient leaders and navigate the difficult currents in business. My name is Trent Theroux.

Okay. That was a bizarre enough question. Sorry. Here’s my line of thinking. There are three reasons I can comprehend why a man would shave his legs. He is a bicyclist. He is a swimmer. Or, he has some other fashion reason. Let’s exclude the last one for today and stick to the cyclist and the swimmer. Why are these two types of gentlemen shaving their legs? The cyclist shaves to manage the potential for road rash in the unfortunate event of an accident. Tending to wounds on shaven legs is easier and more hygienic.

The swimmer shaves his legs to gain a smoother feel in the water. By shaving away the top layer of the skin, the swimmer becomes hypersensitive to the water in an effort to maximize efficiency, reduce drag, and improve speed.

Did you notice the difference in the two gentlemen performing the same act? One shaves for prevention and the other shaves for performance. Profoundly different reasons for taking the same action. Quick show of hands to the men in the audience. How many of you have shaved your legs? My magic mirror shows me that there are a lot of hands raised, but most likely for fashionable reasons.

Can we find another place where an event like shaving occurs? Taking the exact same action for entirely opposite reasons?

Jack Welch, most notably the former CEO of General Electric, wrote in his book Straight From The Gut about the concept of differentiation. Simply put, employees should be vigorously evaluated on a regular basis. Those employees should then be slotted into one of three categories. Good/Average/Poor. The good employees, approximately 20% should be slotted into the fastest growing jobs with the opportunity to achieve exceedingly high compensation. They are going to perform at the top 20% whether they are coached or incentivized – they are just naturally that good. The middle 70% are managed differently. Welch wrote, “This group of people are enormously valuable to any company; you simply cannot function without their skills, energy and commitment. This group is all about training and positive feedback.” Finally, the bottom 10%. Welch does not sugar coat here. The bottom 10% should go. If your company has candid conversations and a rigorous performance evaluation process, this group will know who they are. By Welch’s rule you need to regularly shave off a portion of your staff.

I’m going to go off on a tangent here, but before I do I want to give you this disclaimer; the next story involves a serious psychological and emotional issue for teenagers which I neither condone nor endorse. I’m just telling you the facts…or how I remember them from 35 years ago.

During the swimming state championships in my junior year of high school, I raced in the 100 backstroke. This was a trials and final meet, which means that everyone swims in the trials and the top 16 swim in the finals later that night. The top eight in the finals and the lower eight in the consolation finals. During the trials I placed ninth. A horrible position. My coach called the consolation finals the banana heat and now I was the big banana. I was not going to swim with the big boys that night and have a shot at the podium. And, from my position the only place I could go was down if I wasn’t faster. I was disappointed and pissed at myself for not swimming faster, not trying harder, not training more, pissed because I was sixteen and had raging acne and pissed because my parents weren’t letting me drive. In short, I was a teenager.

There was four hours between the end of trials and the finals. God bless my parents. They stayed at the meet the entire day without complaint. Me? All I did was complain. That’s what teenagers do.

Twenty minutes before my race I was showering and reshaving. There was a single blade disposable razor left on the soap dish. I had already shaved myself the night before, but was now seeking an edge to win this final race of the year. I was not a hirsute teen. I didn’t have 5:00 shadow or stubble for that matter, but I did shave on occasion. I lathered up and stripped the top layer of skin off my arms, chest and started working on my legs when I cut myself. It was more than a nick it was a gusher. Blood flowed down my shin towards my foot. I put my leg under the shower to rinse and felt the sting of the water on the open wound. Quixotically, I took pleasure from the sting and the pain. I pressed the razor against my other leg and opened a cut there. The pain doubled but was drowned out by the exhilaration I felt from the self-mutilation. I proceeded to open cuts on both thighs, both arms and across my stomach. Each cut was just deep enough to allow blood to flow out at a measured rate. I dropped the razor back where I found it and strode out to the competition pool; a swimming stigmata.

As I approached the starting blocks, I caught the eye of the competitor in the lane next to me. He was my nemesis from my High School’s arch rival. The look he gave me as I approached the blocks revealed the depths of lunacy in which I was engaged. I didn’t acknowledge him. I just leaned over into his lane and squeezed a few drops of blood from my arm into the water. He watched this act and just stood on the deck questioning whether it was even healthy to enter the pool. My crimson blood dissolved quickly into the chlorinated water, but there were still traces when the starter called us into the water. I felt the electricity of being stung by eels as my seven slices were exposed to the chlorine. As I remember this scene in my mind it is becoming clearer and clearer to me…..sometimes I’m a pretty sick bastard. Let’s get back on track. But before I do there are two things you should know. First, I’m not condoning cutting as a solution to problems. It was wrong and never happened again. Second, and most importantly, the swimmer who’s lane I squeezed my blood into – became a dear friend at college – and also became the godfather to my daughter, David Hardy.

I am now going to give you my unscientific, non-peer reviewed theory on differentiation. Are you ready? Got your pencils out? Here it is: Prune your roses. You heard it right! Prune your roses. It has been endorsed by at nearly all of your local FTD florists. Here’s how it works.

According to Better Home & Gardens, there are three primary reasons to prune your roses. First is health. By removing dead or damaged canes the air circulation will improve helping the continued growth of new buds. Second is appearance. Bushy Modern roses need help to maintain their compact, open form. Cutting off spent flowers encourages plants to rebloom. The third reason to prune is for control. Some roses grow with wild abandon. Trimming rose bushes removes diseased and dead stems reducing the overall size of the plant but leaving it in a stronger position to grow more beautifully.

Me? I have a black thumb. You should never let me get close to your roses. They’ll wither and writhe in fear just knowing I’m in the flower bed.

Jack Welch was a master at pruning his roses, some of that to the detriment of General Electric’s rank and file. It is hard to dispute the success he had in transforming his company from an out of control vine into a flower with a healthy bloom. Jack wrote that “failure to differentiate among employees and holding on to bottom tier performers is actually the cruelest form of management there is.” I see it as cruel to the company and the employees who have the strength and aptitude to carry it forward. And, I see it as cruel to the bottom tier employees because they might be in a place that is uncomfortable for them to work and missing out great opportunities elsewhere. Confess this to yourself… You differentiate now. You rank your employees in your head based on their abilities. You know which employee you would pick first in a kickball game. The difference between Welch and most managers is that he was willing to act on those instincts or assessments.

Resilient leaders need to be willing to wield pruning shears for the sake of the entire rose bush or at least be handy with a Gillette Mach 3 to work on those legs.

Folks, thank you for listening to Swimming in the Flood where we try to develop resilient leaders. It’s tough navigating life’s currents but with one tack or another we can get there together. You can find more podcasts and videos on my website at www.trenttheroux.com. Music today is from Bensound. If you enjoyed today’s show, please tell a friend, leave a comment or subscribe. I would be happy to discuss speaking at your organization’s next event. Just drop me a line at. info@trenttheroux.com. I look forward to getting together next week. See you.