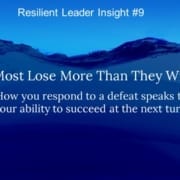 In your mind, have you ever hoped that someone would have bad luck and fail? Have you ever said it to someone out loud? Looked them right in the eye and wished them to suffer a hardship. Would you say it to a 13-year old? I can tell you about one man that did exactly that. He looked a 13-year old in the eye and wished him bad luck. It was Supreme Court Chief Justice John Roberts.

You should know that I revere the body of the Supreme Court. Not just how it’s presently constituted, or with who’s a liberal and who is a conservative, but rather the Court as an independent branch of government. And more so, the individual brilliance of the jurists. Their collective wisdom and their ability to cut directly through an issue to its bare essence is a great model for resilient leaders to learn from.

Justice Roberts gave a commencement speech to his son’s middle school graduation which was highly bizarre from the typical, “you can change the world” speech. He said, “I hope you suffer betrayal, because that will teach you the importance of loyalty. I hope that you will be treated unfairly, so that you will come to know the value of justice. And when you lose, I hope every now and then your opponent will gloat over your failure. It is a way for you to understand the importance of sportsmanship.” Wait a minute! I thought everyone got a trophy these days? Or at least a medal.

This is sage advice for every youth. As much as we want to insulate our children from exposure to harsh realities we need to set their expectations that Sir Thomas Moore’s Utopia is still centuries away. Is bad fortune is coming? It might be just around the corner. Do you as a resilient leader wish bad luck to your team?

I’m going to go off on a tangent here. My family is a board game family: Life, Monopoly, Sorry, Risk — you name it we play it.  Since my children Max and Haley were young we had one rule about board games: Loser cleans up the game. Winner watches. For Max as a three year old that was a hard outcome, particularly when his eight year old sister was dancing around the room gloating. There were tears and frustration, but in time the game was cleaned up. And he cleaned up often.

I’m not one of those parents who threw the kids a bone and let them win a game once in a while. They needed to earn the win. Don’t worry, I wasn’t using Albin’s Countergambit on the chess board or blocking his shots in basketball because I was two feet taller.  (Wait a minute. I did do that. Sorry Max.) For board games, we played age appropriate ones so each had a reasonable chance to win.

Something wonderful happened when Max was thirteen. He beat me at Monopoly, two days later he beat me at Stratego and at the end of the week he beat me at chess. After each win, Max’s victory dance grew larger, louder and more elaborate. After the third win, my house looked like a Mardi Gras parade with all the trumpeting and the confetti and the beads. Wait he was thirteen, there were no beads. All through the parading, Max was gloating. I was seething (inside). But most importantly I was the one cleaning. What goes around comes around.

I think I did a fair job of teaching my children that we don’t always win. That, in fact, we will lose more than we win. As resilient leaders, we need to prepare our teammates for the prospect of losing…of defeat. We should not sugarcoat why we lost either. Direct conversations with your employees about the shortcomings of your enterprise will prove highly beneficial in their development. In your development.

Justice Roberts was right in his speech. “Whether I wish these things or not, they’re going to happen. And whether you benefit from them or not will depend upon your ability to see the message in your misfortunes.” In some circles, wishing someone bad luck is a call for hope. In the theater they say, “Go break a leg.” I gave a speech earlier this month and right before I went on stage someone said, “Break a lip.” That was hysterical. I walked on stage with a little giggle and had to compose myself.

I am now going to give you my unscientific, non-peer reviewed, resilient leader theory of bad fortune. Are you ready? Got your pencils out? Here it is: The Agony of Defeat. You heard it. The Agony of Defeat. This theory has been endorsed by at least one Slovenian former ski jumper.

The theory is based on the iconic theme from ABC’s Wide World of Sports. Before ESPN this was our only window into sports competitions around the world. I was glued to this every Saturday at 5:00. You may remember Jim McKay’s dulcet introduction. “The agony of defeat” was shouted by my friends at every strikeout, lost board game or wipeout on our bikes.

Vinko Bogataj is the man in the Agony of Defeat video. On 7 March 1970 a light snow had begun falling at the start of the competition, and by the time Bogataj was ready for his third jump on the Heini Klopfer hill, the snow had become quite heavy. Midway down the inrun for his jump, Bogataj realized that the conditions had made the ramp too fast. He attempted to lower his center of gravity and stop his jump, but instead lost his balance completely and rocketed out of control off the end of the inrun, tumbling and flipping wildly, and crashing through a light retaining fence near a crowd of spectators before coming to a halt. Bogataj suffered a mild concussion and a broken ankle in the spill.

The video, in 1970 terms, went viral and was known the world over. Bogataj became a man associated with his defeat. But, the defeat did not stop him from soaring even higher than as a jumper. In 1991, he reached the top of the podium as the coach of world champion ski jumper Franci Petek. During an anniversary special for ABC’s Wide World of Sports, Bogataj received the loudest ovation of the event including a standing ovation from Muhammad Ali.  People knew of Bogataj’s defeat and applauded him for standing tall. Are you the type of leader who can stand tall, stand above the rest in your Agony of Defeat moment?

Business books are littered with stories about entrepreneurs who failed only to succeed on a greater level. Reid Hoffman founded SocialNet in 1997. The site was a networking platform and a dating site which failed. A decade later he founded LinkedIn.  Reid said, “It’s most important to get your product above the noise so people can encounter it. If you’re not embarrassed by your version one release, you released it too late.”  I’m still embarrassed of the first released tape of me singing. I’m even more embarrassed of the second one. Anyway, Brian Acton was a vice-president of engineering for Yahoo. He interviewed for jobs at Facebook and Twitter and was rejected by both. A few years later, Brian launched WhatsApp which grew to be one of the biggest messaging platforms in the world and sold the company for $19 billion to….Facebook.

This is critical for resilient leaders.  What can we take from our agony of defeat moments and build on? And trust me…there will be agony of defeats…just like my last card game with Max.

Max and I now play card games during which he will constantly question my manhood. All the while I’m using the agony to question why I bothered bringing him into this world in the first place or worse, continue paying for his college!

Folks, thank you for listening to Swimming in the Flood. Resilient leaders face challenging currents and it is tough navigating, but with one tack or another we can get there together.  You can find more podcasts and videos on my website at www.trenttheroux.com.  Music today is from Bensound. If you enjoyed today’s show, please tell a friend, leave a comment…subscribe. I would be happy to discuss speaking at your next conference or event. Just write to me at info@trenttheroux.com.  I look forward to getting together next week. And from me to you I wish you some bad luck. See ya.

10. A Clean Shave
Scroll to top