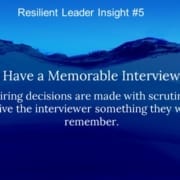 Have you ever walked a runway? Strutted down the catwalk, paused at the end, glared into the audience, pivoted and sashayed back? Was your fantasy walk more like Victoria’s Secret or Zoolander?

Quick show of hands: how many of you have paraded around in your underwear while being under the careful examination of harsh critics? My magic mirror shows me that a few of you freaks out there have both hands up.

The National Football League’s combine recently completed. This is an event where strapping 21 and 22-year old men line up in their underwear to be ogled by mostly other men holding stopwatches. They run fast, they push weight, they jump high, and they took the Wonderlic. The Wonderlic personality test is a popular group intelligence test used to assess aptitude of prospective employees for learning and problem-solving in a range of occupations.

For all of its stripped-down pomp and circumstance this is a job interview. Although I must say that I was not required to bench press more than a paperclip when I interviewed for my first banking job. These athletes subject themselves to a battery of tests and exams to determine whether that have the appropriate skills to adapt and thrive through the mental and physical.

I’m going to go off on a tangent here. When I was 10 years old, I played my one and only partial season of football. On uniform day we were ushered into Bristol High School’s gymnasium to receive and try on our uniforms. The coaches organized us by number. Because I couldn’t tell the difference between a tight end and a split end, I was given a number in the 90s, signifying that I was a football flunky and should only be used for kindling wood at the bottom of a pile.

I entered the gym and was issued my pads and uniform then ushered to an open area for me to try them on. I was a chubby ten-year old and positive body image was not one of my strong suits. All the boys stripped down to their underwear and were told to put on their uniforms. I looked into the bag they gave me and found shoulder pads. I put these on and instantly felt bigger, stronger. The pants were white and Capri length. They fit well enough after I let out a draw string on the front. I recognized the knee pads and promptly put my feet through the opening and pulled them up. There were two pads which resembled Ruffles potato chips. They had ruffles on the top of them (and holding them made me realize that it was two hours until dinner and I was getting hungry) I found two openings on the inside front of the pants. They were to protect my thighs.  Another pair of pads had a U-shape to them. I was cheating off number 81. He put these on his hips. He was #81 because he was a receiver. Or in 10-year old terms – very skinny. There was one last pad in my bag. It was long and thin. Maybe two inches across and about eight inches long. It didn’t take a dummy to know where that pad belonged, and I demurely stuffed it down… the front of my pants.

I walked over to one of the coaches to inspect my uniform and the first thing he did was slam both his hands down on my shoulders. It felt as if trying to bury me like a croquet wicket into the ground. Other guys were getting the same treatment by the coaches, so I didn’t feel too distraught. He got on his knees and slapped both of my knees, both of my thighs and on each hip testing that the pads actually existed and that I didn’t really think I was wearing ruffles potato chips. Coach then turned me around and with the back of his hand smacked me in the middle of by butt. Then he repeated. My butt at that age could not be missed.  My Uncle Rick used to call me the Crisco Kid. The coach turned be around and asked where my butt pad was? I told him that I didn’t know. Maybe my bag came without one. He asked if I was sure. “It’s about two inches wide and about eight inches long.” I turned red.

“Son, you’re ten years old. You need protection there, but not 8-inches worth. That pad is meant for your ass crack.” Needless to say, my all too brief football career was not going to lead me to the NFL combine.

Job interviews all have interesting nuances, but there is one commonality, one unique identifier, the single thread: the interviewee.

I am now going to give you my unscientific, non-peer reviewed theory on interview etiquette. Are you ready? Got your pencils out? Here it is: Spritz some perfume.  You heard it! Spritz some perfume. It has been endorsed by at least one wild haired German physicist. The concept is analogous to the second law of thermodynamics. When you spritz a bottle of perfume, the molecules disperse throughout the room. The essence of the perfume is felt throughout the room. The same should apply to interviews. Your essence should permeate throughout the room. You should not remain bottled up. What for? The NFL combiners are there to strut their stuff in front of stodgy coaches and a national ESPN2 audience. And, so should every job interviewee. Boldness is a virtue. Spritz yourself.

Here is a suggested question you can ask your potential employer at the end of the interview: “Do I have the job?” Barbara Corcoran, who you may have seen on Shark Tank, told a story about a writer who was interviewing for a position with Barbara. The woman was introverted during the interview but finished by asking point blank, “Do I have the job?”  Barbara was stunned. It conveyed the message that I respect my time and so should you.

Here are some interesting facts about job interviews from a study prepared by JobVite.

While the average job interviews were forty minutes, 33% of respondents indicated that they know within the first 90 seconds if they will hire the candidate. Why? Here are some of the non-verbal reasons for not hiring.

Did you notice what I didn’t hear in that list? People who spritzed perfume. They listed characteristics of the people not comfortable in their skin, people who are not confident that they should be hired, the meek.

The meek may inherit the earth, but they will not get the open position. My mother told me that when I was called out for having the butt crack pad in the wrong spot that I should have danced through the locker room and laughed it off.  I’m not sure that was the right advice for a 10-year old, but I am definitely a little bolder now.

We need to be if we want to attain the great jobs we seek. I am willing to walk the runway…in my underwear… particularly if I’ve spritzed myself with a little Voyage by Nautica for Men. Are you?

Folks, thank you for listening to Swimming in the Flood. It’s tough navigating life’s currents but with one tact or another we can get there together. You can find more podcasts and information about my speaking engagements on my website at www.trenttheroux.com.  If you enjoyed today’s show, please tell a friend, leave a comment or subscribe. I look forward to getting together next week. See you.

06. Execute Them All
Scroll to top