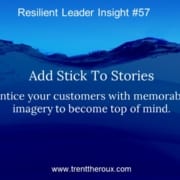 I was 100% positive, beyond a shadow of a doubt, guaranteed certain that in 1985 Madonna was carrying David Lee Roth’s baby.  I heard it in the hallway in between classes from a source that new somebody that worked at the school newspaper, so it had to be true.  And, it made perfect sense.  David Lee Roth was hurting from his breakup with Van Halen and Madonna was completing her Like A Virgin tour.  It made perfect sense that they would get together.

Hmmph.  Isn’t it funny how some stories stick with us for decades?

I would like to give you a little test today.  Simple test.  I’m going to ask you to memorize a few pieces of data.  Now, I know that each of you have your pencils ready to write down our developing resilient leader theories.  But, I want you to use your own noodle for this experiment.

The seven wonders of the ancient world are the Hanging Gardens of Babylon, the Colossus of Rhodes, the Giant Pyramid of Giza, the Lighthouse of Alexandria, the Temple of Artemis, Statue of Zeus at Olympia and the Mausoleum at Halicarnassus.  Got them.

Last, the gross domestic product for the three Scandinavian countries in 2019 was Norway $418 billion, Sweden $530 billion and Denmark $347 billion.

Let’s tuck those facts away for a little while.  We started our podcast with the absolutely true story about Madonna.  And, why I believe that it’s true.

The theory was created following an experiment with college students.  The students were approached and asked to complete a survey about a contemporary tech product.  In exchange for answering the questions, the student would receive an envelope containing $5.  The survey itself didn’t matter.  The study was concerned about what happened with the $5.

We can see the profound effect of this study in the way organizations market to us.  We are shown one hungry, starving child in the television ads.  There is no mention of the thousands, nay, millions of others.  The story of the one child is the one they are trying to move us with.  Joseph Stalin put it morbidly saying that a single death is a tragedy, a million deaths is a statistic.

So, how can developing resilient leaders use this information to help us communicate better?

The theory is simple.  Here’s how it works.  Let’s go back to the seven ancient wonders of the world.  Can you name them all?  I’ll give you a second.  Got them all?  No?  How many do you remember?  Three?  Four?  You got the pyramids.  Maybe something in Babylon.  A little sketchy after that.  Let’s try another group of seven items and see how well you remember.

Can you name the seven ingredients in a Big Mac?  I’m sure that you can.  In fact, over 80% of Americans in a 2007 study knew two all-beef patties, special sauce, lettuce, cheese, pickles, onions on a sesame seed bun.  Over 80% retention rate for something that will strain your heart with cholesterol.  Why is that.  The Big Mac story is “sticky” it has two elements for retention.  First, it’s a catchy jingle.  The song is a mnemonic device.  And, more importantly second, you actually cared about how it visually looked to you.  It captured your heart and mind.  There is no great visual of the Mausoleum of Halicarnassus.  Your mind does not have the same incentive to remember something that trivial unless your Ken Jennings.

Okay, let’s take the Supreme Court members.  First, mentally draw a tic-tac-toe board in your mind.  Now, I want you to put the three women on the right, put the three newest men in the middle and the three senior jurors on the left.  Pretty easy right?  I guess I’m making a large assumption that you remembered all nine of them.  Maybe that too much to ask.  Scratch the jurors.  Could you…put the Brady Bunch in there?

My magic mirror shows me that everyone’s is nodding yes!  We can’t identify and categorize nine of the most important people in our country.  Yet, we all identify with a fictitious family created over 50 years ago.  Why is that?

I said earlier that it was how the visual connects with people determines how they will remember a story.  Statistics don’t really give us a mental picture that will last.  Plus, Stephen Wright told us that 42.7% of all statistics are made up on the spot, so that doesn’t help either.

Create a visual that will stick in your listener’s mind to give your story legs.  Over the past year and a half, I’ve tried to do this with the listeners of the podcast; eat your broccoli, raise your antenna, trust your caddy, kiss the girl, take the stairs, clean your curtains.  These metaphors create images for people that they can use later when they tell a story.  It makes your story last for a very long time.

I know that Madonna wasn’t pregnant with David Lee Roth’s baby.  Well, I know that now.  The story stuck with me for over three decades because it captured my heart and mind.  It spread through me like wildfire   When I was in High School, I had a massive crush on Madonna.  She was gorgeous, talented, provocative, provocative.  The story of her pregnancy resonated with me because I was personally invested in Like A Virgin.  I mean.  I was so I figured….  Well, I figured that I lost my chance.

If you enjoyed this episode, please subscribe.  That way you can enjoy developing resilient leader theories hot off the presses.  You can find past podcasts along with their texts on my website.  Please take a minute and check them out at www.trenttheroux.com.