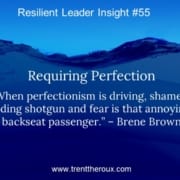 How much do you pride yourself on being perfect?  We all want to provide high quality services, secure excellent grades, raise immaculate children, achieve amazing personal goals, but how close are they to perfection? Do you constantly measure yourself by how close to perfection you come?   Maybe my real question today is – how much does it bother you if they are not perfect?

Are you the type of person who is significantly bothered when something is not perfect?  I’ve met several in my time.  My mother took extreme pride in the beauty, design and organization of her living room.  It was pristine.  Always.  As a teenager, I was forbidden to enter the room.  The living room was intended for special guests and holiday parties only, not for teenagers who ate bags of cookies at a time.  I don’t know why my mother was obsessed with the perfection of her living room.  Maybe it simply was the one room in the house that wasn’t as disheveled as her teenage son.  Regardless, I was forbidden to enter.

One Saturday night my buddies were at my house to play Dungeons & Dragons.  Like typical teenagers, we raided the fridge and pantry.  The next morning my mother called me out of bed – and it wasn’t even 10:00 yet!  She called me out of bed to point out that her living room was violated.  I stood on the edge of the room.  Even with her there it felt wrong to enter the room.  My mother said, “Trent do you see?”  No, I couldn’t.  Even accounting for the fact that I was a bleary-eyed teenager at an ungodly hour on a Sunday morning, the room looked perfect.  My mother said, “there are footprints in the carpet.”

I strained to look and she was correct.  There was a set of footprints heading to the fireplace and back.  One of my friends must have walked in there during the Fritos and Dr. Pepper raid.  My mother was calm when she told me that I was grounded for two weeks.

My mother’s desired perfection from her room, but thankfully it didn’t extend to the whole house.  There are people who struggle with imperfections and their inherent requirement that everything be perfect.  Perfect work, perfect body, perfect children, perfect grades.

Brene Brown wrote, “When perfectionism is driving, shame is riding shotgun, and fear is that annoying backseat driver.”

Atelophobia is often referred to as perfectionism. And while it is considered extreme perfectionism, Dr. Gail Saltz, associate professor of psychiatry at the New York Presbyterian Hospital Weill-Cornell Medical College says more than that, it is a true irrational fear of making any mistake.

It’s easy for us to shrug off someone else’s need for perfectionism as some type of mania, but does it happen in each of our lives sometimes?  I’ll confess that when I write out my podcasts each week, I’ll stop no less than a dozen times because Microsoft Word highlighted something red or blue.  Red because I typed it wrong and blue because I (most often) inserted an extra space.  Unfortunately, my mind can’t see past these deficiencies and I stop to immediately correct them, sacrificing the flow of my writing in the process.  My mind is wired that fixing a spelling error is more important than creating a meaningful developing resilient leader theory.

Salvador Dali wrote, “Have no fear of perfection – you’ll never reach it.”  He’s right.  I know that I haven’t reached it yet, but that doesn’t stop me from wanted to perform better.  For some people, the desire for perfection can be paralyzing.  Sylvia Plath wrote, “It’s a hell of a responsibility to be yourself.  It’s much easier to be somebody else or nobody at all.”

One of my heroes was almost perfect for a day.  But if you asked him he would say that he was just happy to be there.  My hero was born just a couple of months before me and was raised in Flint, Michigan.  While attending the University of Michigan he won the James E. Sullivan Award   as the nation’s best amateur athlete, becoming the first baseball player ever to win the award.  In 1988, his team won a gold medal in the Seoul Olympics, and in 1989 he started pitching for the California Angels, without playing a single game in the minor leagues.  Jim Abbott was a powerful pitcher who was traded to the New York Yankees before the 1993 season.

On September 4th, 1993 Jim notched one of the most inspiring individual performances ever seen in sports.  He pitched a no-hitter.  For those who don’t know baseball terms so well, a no-hitter means that no batter reached base safely with a hit.  This is different from a perfect game.  In a perfect game, none of the twenty-seven batters reach base at all.  On September 4th, Jim Abbott was very good, not perfect, very good.  To me, though, he is perfect.  And!  He’s left handed – like me – he’s left handed.

That’s not entirely fair.  His left hand is his only hand.  I’ll say that one more time.  Jim Abbot only has one hand.  His right arm ends at his wrist.  I am telling you the story of a one-armed pitcher that threw a major league no-hitter.  I’m sure you are asking yourself.  How did he do that?  Did he wear a glove?  Didn’t everybody just try to bunt on him?

When preparing to pitch the ball, Abbott would rest his glove on the end of his right forearm. After releasing the ball, he would quickly slip his hand into the glove, usually in time to field any balls that a two-handed pitcher would be able to field. Then he would secure the glove between his right forearm and torso, slip his hand out of the glove, and remove the ball from the glove, usually in time to throw out the runner at first or sometimes even start a double play. At all levels, teams tried to exploit his fielding disadvantage by repeatedly bunting to him.[7]

Jim wanted to play baseball so badly when he was a child that he continuously threw a rubber ball against a wall to practice putting the glove back on his left hand.  In practicing to replace the glove, Jim’s arm grew stronger and stronger to the point the he became a powerful pitcher.

So, how does this relate to atelophobia and business?  The answer is simple.  We can agree that we’re not always going to throw a perfect game, but a no-hitter is still outstanding.  The industry that exemplifies this is software development.  Reid Hoffman said, “If you’re not embarrassed by the first version of your product, you’ve launched too late.”  Hoffman asserts that an attitude of making a perfect first impression makes sense in a world ruled by gatekeepers and beholden to physics.  But, in today’s software world we can launch with a great concept and finalize the details as we learn how our customers react.

Many companies can get delayed in releasing new products because they are so focused on designing and developing that they keep delaying the product release well past the deadline.  Failure to launch has significant financial effects not only on the current year, but in subsequent years because the first year delay often continues through the product life cycle.

Here are some companies who think differently about being perfect.  Facebook continues to redesign consumers’ expectations of the software by releasing the product bi-weekly.  Etsy releases to its production servers 50 times a day, exhibiting fewer disturbances than when the company used its previous approach.  Netflix developers release their code multiple times a day.  Lastly, Amazon developers release codes every 11.7 seconds on average, lessening both the number and duration outages at the same time.  Imagine, every 12 seconds there is a change to the programming on Amazon.

This is why we should be happy with tossing a no-hitter.  A product that is outstanding, albeit not perfect.  Jim Abbott by all measures was not perfect.  He didn’t need to be to inspire me.  Perfectionism is hard to obtain.  There was a girl in my sixth grade class named Andrea who wore a t-shirt every week that summed this podcast up.  The t-shirt read, “Pobody’s Nerfect.”  Isn’t that just about perfect?

If you enjoyed this episode, please subscribe.  That way you can enjoy developing resilient leader theories hot off the presses.  I’m in the process of developing a two-day class for a professional firm to train their employees in resilient leadership.  The journey has been exciting and I can’t wait to deliver.  If you would like more information about my offerings, please send me an email at info@trenttheroux.com.

56. Boarded By Pirates
Scroll to top