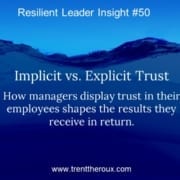 When I was in college we played a drinking game called Anchorman.  Maybe you played it once or twice too.  The concept is that there is a team of four people who are tasked with drinking a full mug of beer.  Each member would drink some portion of the mug and the anchorman was responsible for chugging the balance.  It’s designed as a team drinking event.  The object is for the team to finish their beer first.  Yet, in many games I watched, the first three people would take only a sip or two and leave a massive amount for the anchorman to finish.  The table would laugh, or chant, for the anchorman to chug.  Beer would leak down the sides of his face, he would gasp as he choked on the beer a little, a large belch was mandatory…but I always wondered…if this was truly a race, why wouldn’t we do our best for our anchor to win?

There is a difference between explicit trust and implicit trust.  The adverb explicit means, to be clear about something; leaving no room for doubt; to be clear in a detailed manner.  The adverb implicit means, to state something in a way that is not directly expressed.  That sounds a little confusing.  Let me give you an example as I would have understood it when I was seventeen.

It’s Saturday night and I’m ready to go out on a date with my high school sweetheart.  My father has the keys to his car in his hand and he’s preparing to give them to me.  As he does so he says to me, “Trent, I trust that you are going to follow the speed limit, not listen to the radio while driving and be home by eleven o’ clock.”  That is my definition of explicit trust.  My father trusts me and he’s reminding me of why he trusts me.  Here’s my definition of implicit trust.  “Trent, here are the keys.  Have a good time.”

The theory is simple.  Here’s how it works.  Raising the anchor is a clear signal that the boat is ready to sail.  The captain has implicit trust in his crew that all items are operational and in working order.  He knows that every crewmate is prepared to do their duty when called.  Raise the Anchor means that it’s time to put the vessel out to sea.

In 2008, Michael Phelps was seeking to become the most decorated Olympian by winning an unprecedented eight gold medals at the Beijing games.  The record of seven gold medals is held by Mark Spitz from the 1972 Munich Olympics.  But that was a different era.  Spitz didn’t shave for the meet.  Heck, he didn’t even wear goggles.  And, the Americans had a clear advantage over the developed world in swimming.  All three changed in the intervening thirty-six years.

Of the eight races that Phelps was competing in, five were individual and three were relays.  To win eight gold medals, a swimmer doesn’t swim just eight times.  Rather, they could swim up to three times per race.  There’s the trials where you establish yourself for the next round.  The semis where you need to post a quality time to get a favorable lane in the next race.  And, the finals where you blow your brains out for gold.   In total, Phelps may have to swim 24 races over eight days.  That’s quite a workload for someone competing against the fastest in the world.  Then again, Phelps is the greatest swimmer of all time, so he’s got a little something in him.

Phelps won one medal earlier in the day before he faced his biggest Olympic challenge.  And, this wasn’t a challenge just for him.  Phelps was going to be a member of the 4×100 Freestyle Relay.  This means that each member of a 4-man team swims two length of the pool.

I want to go off on a quick tangent.  Most people can’t appreciate the size of an Olympic pool.  Close your eyes and picture your local YMCA pool.  4 or 5 lanes.  25 yards.  Backstroke flags.  Got it?  Good.  Now, an Olympic size pool is 2.4 times larger than that.  And, it’s ten feet deep throughout.    Keep that image in your mind the next time a receptionist at a Days Inn tells you they have an Olympic size pool outback.

The American team hadn’t won gold in this event in 12 years and it was the lynchpin to Phelps’ quest for Olympic immortality.  The stiffest competition they were facing was from the French team, who were the current world record holders and the team was anchored by Alain Bernard, the fastest man in the world.

There is always nervous excitement before the start of an Olympic swimming final.  Americans, because we expect to win everything, held a deep reserve because of the outright and overpowering strength of the French team and because as a nation we wanted Phelps to succeed.

The swimmers were called to the starting block and Michael Phelps stepped up.  Phelps was the leadoff swimmer!  Let me say that again.  The greatest swimmer in the world was going to go first in the relay and leave the rest of the work to his teammates.

I want you to stop for a second and think about how often this happens in business.  How often does the best you have go first in a presentation?  I think most companies leave their best presenter for the finish.  That’s why they call them the closer.  That’s why Vanessa Williams sang “Save the best for last.”  But here Phelps is on the block to start the race and will cede control.

Implicit trust is required to achieve what happened next.  Trust that through training and preparation and strategy the company’s team knows what needs to be done and the deep belief that each is ready to achieve the goal.  Phelps finished 2nd behind the Australians, setting the American record in the process.  The French were in third sending their slowest swimmer to leadoff.  Michael stood on the pool deck, catching his breath and watched his teammates play the game of anchorman.

The French inched closer in the second leg and broke open a 6/10th of a second lead heading into the final leg.  For those who may not appreciate, NASA can send a spaceship through the gap a 6/10ths of a second lead in freestyle.  And, let’s not forget that the world record holder was the closer for the French.

American’s anchorman Jason Lesak waited his turn.  A veteran sprinter in his 3rd Olympic games and the team’s oldest swimmer at 33 years of age.  This is the man that Phelps allowed to be the anchorman of the relay, the man that Phelps now implicitly trusted to help him achieve the audacious goal of eight gold medals.  Here’s how Dan Hick called the race during Lesak’s leg.

Let’s wait just one second.  You should know me well enough by now to know that every story does not have a fairy tale ending.  Sometimes we put our trust in someone, but they come up a little short…and that’s okay too.

Hands down the greatest swimming race I ever watched.  The last ten seconds felt like ten years.  I still feel the pulse now throbbing through my veins as I watch Lesak repay the trust his team put in him.

So, how do Developing Resilient Leaders acquire implicit trust?  It starts with showing trust in others.  For people to trust us, our vision, our opinion, our work we need to show trust in others first.  Trust is about raising the anchor.  Tell the crew that you trust them and you are ready to sail into tomorrow with them.

When it’s time to Raise The Anchor and take off, I want Jason Lesak with me.  I don’t know how well he can chug a beer, but I implicitly trust him to be the anchorman of my relay.

If you enjoyed this episode, please subscribe.  That way you can enjoy developing resilient leader theories hot off the presses.  Also, I ask you one small favor.  Please suggest it to a friend and help our network grow.

You can find past podcasts on my website.  Please take a minute and check them out at www.trenttheroux.com

52. Whitewash The Fence
Scroll to top