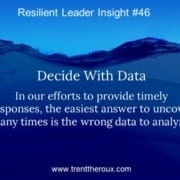 On the first night of each graduate school class, I would pose the same problem to my students. I would go to the board, draw a bright circle on the middle and tell them that this was a piece of data. I would ask them if they could analyze the data? Most were confused by such a vague question in the first ten minutes of class and wouldn’t even put their heads up. I would then draw a second dot somewhere else on the board and ask if they could connect the two and give me an analysis. Many now could see the opportunity to draw a line and nodded at my question. One young woman in the middle row shook her head. I asked if she could use the two points to interpret the data. She said that she could, but that the answer would be worthless without more data. I nodded. Smart girl.

I asked the class to imagine that the two points represented New York and Los Angeles and that I wanted to know how to get from one city to the other. The answers came at me fast and furious and none seemed to be exactly the same. I added the variable that some wanted to visit the Grand Canyon and some wanted to visit Mount Rushmore along the way. One of the students said that there were thousands of ways. I think the answer is closer to infinite ways, but he was catching on. Drawing a straight line between the two points doesn’t account for all the backroads, layovers and waystations during our trip. The same is true with our business decisions. Just two pieces of data can lead us to make bad decisions because every analysis isn’t a direct flight from JFK to LAX.

Rather than settling for two pieces of data, search for many tens, hundreds, thousands and perform a regression analysis to give you the best fit. Maybe I should take a quick minute for those of you who never took statistics to explain what I mean. Amy Gallo, in the Harvard Business Review offers this example, “Suppose you’re a sales manager trying to predict next month’s numbers. You know that dozens, perhaps hundreds of factors from the weather to a competitor’s promotion to the rumor of a new and improved model can impact the number. Perhaps people in your organization even have a theory about what will have the biggest effect on sales.” Have you ever heard, “Trust me. The more rain we have, the more we sell?”

The math on this can be a little tricky. However, it’s as simple as making two columns in Excel. Two columns and you can be on your way to being a business prognosticator!

I wasn’t thinking of using regression analysis during the birth of my first child, although I wish I did. We were in the delivery room and they just hooked Jennifer up with a belly monitor. I’m not sure of the official name, but let’s call it a belly monitor. It monitored Jennifer’s contractions both the frequency and the intensity. When the monitor was first put on we saw an occasional blip. Jennifer commented that it felt like gas. It wasn’t more than an hour that the contractions started to increase. She was strong. Biting her lips taking deep breaths. Me? I was busy watching the monitor and measuring the height of the peaks and how much closer together they were. An hour later, I noticed something that wasn’t good for the long term health of my marriage. The monitor would reveal to me the strength of the contraction about two seconds before the actual pain hit Jennifer.

I wish now that I could appreciate the ass I was back the delivery room. “Jennifer, oh this one’s going to be a good one.” She would turn to me and her eyes would roll back into her head. “Good job honey.” I tried to comfort her. This went on for another hour.

In hindsight, it may have been the wrong to use the phrase, “These peaks are resembling the Himalayas.” “Shut up.” This was the terse response I received. The final time I paid close attention to the monitor it took my breath away. The peak was so high that I could only whistle and stare at Jennifer with a blank face. I think I heard the work castration, but I’m not sure. Regardless, I had all the data I needed, but I did not analyze it correctly.

I am now going to give you my unscientific, non-peer reviewed, resilient leader theory on analyzing data. Are you ready? Got your pencils out? Here’s it is. Interpret The Right Data. You heard it. Interpret The Right Data.
The theory is simple here’s how it works. I had all the data I needed in the delivery room. Unfortunately, the data I needed to analyze wasn’t on the monitor; it was on the bed in tears. Interpret the right data. Let me give you another example.

The Cookie Jar was opened in Boston in 1981. In its origin, the cookies were being sold on street corners, mostly to business people. The first day’s sales were modest, encouraging. The next day was higher, the following day even higher. People came to seek out the cookie sellers and the Cookie Jar increased production and salespeople on the street. By all accounts, this was the way that you want your startup to go. Each day, the cookie sellers would take their inventory and return at the end of the day with their receipts – sometimes earlier if they sold out quicker. You would expect that most entrepreneurs would be very happy with this growth. And it continued for a while until the owner asked his staff to perform one more task with the sales.

Ron wanted them to record the time of each sale. He wanted to know when the cookies were being sold. The data he received was astounding. The biggest time slot for cookie sales was between 11:30 and 12:30. Reasonable, right? It’s lunch time. People want a snack. The next largest time slot was between 4:00 and 5:00pm. Again reasonable. People getting out of work and buying cookies to take home. Do you know the lowest period of cookie sales? The data wasn’t even close. There were virtually zero cookie sales between 9:00 – 11:00am.

The interpretation of this data lead to a dramatic shift in American casual dining. Realizing that there were no sales in the morning meant that the Cookie Jar could change its production schedule. It could shift production to four hours later to meet the cookie demand. Then they would have capacity to make more products. Products that could be sold between 7:00am-11:00am. Breakfast products. That’s when the owner, Ron, conceived of baking pastries and croissants for morning eaters.

Ron, found a different market for his company. A market that had an appetite for baked goods that weren’t cookies. No, this market was even more lucrative. He sold baguettes.
At one midday a year later, a customer entered his store and purchased a baguette that he wished to have sliced for him. Ron sliced the bread for the customer, who in turn took out sandwich meats and cheese from his briefcase and made a lunch for himself. This piece of data was nearly as profound as the no cookies before noon data. From this data, Ron discovered a market for artisan lunches. A discovery that would turn into his acquiring a struggling local bakery called Au Bon Pain. Ron Shaich interpreted the right market data to create over 250 locations nationwide.

Sometimes analyzing the right data is hard. Developing Resilient Leaders may think that they’ve completed their work because we analyzed more than two data points. It takes questioning and curiosity to approach the correct data with the correct mindset.

Let me leave you with this final piece of data. Ron Shaich interpreted the data from his years of building Au Bon Pain and used it to create his true masterpiece. For those of you hearing Ron Shaich’s name for the first time it probably interests you to know that starting with an analysis of cookie data, Ron created the epitome of fast casual dining with – Panera Bread. Ron realized from his data that there was a better dining experience available than Au Bon Pain. He sold them and created Panera Bread. For which I and the chipotle chicken avocado melt I’m holding in my hands now thank you. But, as I’m chewing, wonder what regression analysis Ron used to arrive at the decision.

If you enjoyed this episode, please subscribe. That way you can enjoy developing resilient leader theories hot off the presses. Also, I ask you one small favor. Please suggest it to a friend and help our network grow.

You can find past podcasts on my website. Please take a minute and check them out at www.trenttheroux.com.

48. Hustle Down The Line
Scroll to top