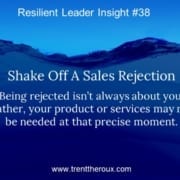 Coronavirus Fear Around Us

I was on a run through the middle of town a few days ago and arrived at an intersection when I put my leg on a post to stretch my hamstrings. Traffic was light for 5:00 on a weekday. About twelve feet away from me a couple walking along the sidewalk stopped. They were in their mid-30s and both wearing masks. They stopped right in the middle of the sidewalk. After a few seconds I asked if they were waiting for me to move. They both nodded. Stretching, I tried to rationalize why they wouldn’t just walk in front of me, behind me or next to me. The answer was glaring; fear.

How much fear must be in a person to not make them want to walk around someone? Maybe a better question is – why wasn’t I fearful of them?

I used to think that the most famous quote about fear came following the bombing of Pearl Harbor, but I was wrong. President Roosevelt’s famous quote on fear was delivered during his first inauguration address in 1933. Here’s what he said.

Let me assert my firm belief that the only thing we have to fear is…fear itself — nameless, unreasoning, unjustified terror which paralyzes needed efforts to convert retreat into advance. In every dark hour of our national life a leadership of frankness and of vigor has met with that understanding and support of the people themselves which is essential to victory.

It was a powerful address given to a nation during a time of crises. Fear is a powerful emotion that can create paralysis in all of us to some extent. The couple on the sidewalk were paralyzed with fear that I might be contagious with the coronavirus. Me…I’m not fearful of that. I’ve got plenty of other demons to deal with. No, I am only fearful of one thing. Rejection. Specifically being rejected while trying to sell something. It is so paralyzing for me that most often I would rather not even attempt to sell something because the fear of being rejected is greater than the satisfaction of making a sale.

Developing resilient leaders become skilled in navigating difficult currents in business and in life. By my own admission, I’ve navigated away from the requirement to sell by working in finance and education. But now, as I spend more time pursuing speaking and training the requirement to sell is smacking me right in the face. I acknowledge that I need help so I turned to an expert; Frank Somma.

Frank Somma may not be a household name to you, but I think that’s only a yet. Frank S-O-M-M-A (his website is his name) is the author of B2B is really P2P. A freakin’ clever title by the way. I met Frank last month at a conference in Arizona. Back when we were able to ride an airplane without wearing a hazmat suit. Frank resembles Christopher Moltisante from The Sopranos in looks and mannerism. My introduction came as Frank was explaining to a group about options and said, “You can’t ride two horses with one ass.” Brilliant. I was going to like this guy.

B2B is really P2P is about sales. Actually, the first chapter is titled Sales is not a Dirty Word! The book discusses personal responsibility, gaining rapport and how desire wins. The most valuable section of this book for me spoke about accepting rejection. Frank describes being rejected isn’t about YOU. Rather, you were rejected because someone didn’t want or need your product. Or, the time wasn’t right. Regardless, they weren’t rejecting you as a person. What a revelation!

I am now going to give you my unscientific, non-peer reviewed, resilient leader theory on the overcoming fear. Are you ready? Got your pencils out? Here’s it is. Kiss The Girl. You heard it. Kiss the Girl.

The theory is simple here’s how it works. When I was fourteen and starting to date my high school sweetheart, I was petrified to kiss her because I feared that she would reject me. I remember mustering up the courage on August 26th, 1982. During those last weeks of summer we would bicycle around Colt State Park and spend the time walking on the beach and throwing rocks in the water. In my mind, I planned to walk us up to this bench overlooking Narragansett Bay and kiss her firmly on the cheek. Well, maybe not too firmly…maybe gently with a touch of firmness. Regardless, I was going to kiss her. We sat on the bench enjoying the summer’s sun shimmering off the bay and I was hyperventilating because I was scared that she was going to slap me and want the summer to end.

We sat on the bench and I gave myself a deadline to kiss her. I said, “I’ll count to ten then kiss her.” But, I realized quickly that this would work better as a countdown. I’ll count down from ten then kiss her. While I was wrestling with the proper way to count to ten before kissing a girl, she asked me what towns we were looking at across the bay. Perfect! The plan hatched in front of me. I would point to the towns and when I reached Providence, due north of us, I would be leaning next to her and then I would kiss her.

I started pointing. That’s North Kingston, that’s Warwick, that’s Cranston, and that around the point is Providence. I closed my eyes, puckered my lips leaned over and kissed…air. She wasn’t there. She stood up to get a better look around the point. I swung and missed and nearly fell off the bench in the process. Who would have ever thought kissing a girl was going to be this hard.

My courage was shot. It was nearly 2:00 and she had to get home for her babysitting job. We pedaled slowly and I thought about the opportunity missed. If only I counted up to ten she would have been sitting there and I would have kissed her.

On the bike ride home I realized a developing resilient leader lesson. Carpe Diem. I didn’t know Latin then, but I understood the essence. Carpe Diem – Seize The Day! From that time I’ve always tried to live my life in that spirit. Be bold! Be brave! Be Strong! Without action life is yours to miss. Go ahead. Take a chance. Kiss the girl. Who knows? It might be what she’s been waiting for? Even my friend Sebastian knows what it’s all about.

Overcoming fear of rejection in sales. It’s funny how we can isolate our fears and concerns into such granular concepts when we really concentrate. Rejection in sales. Now with Frank’s help. I can apply the kiss the girl theory to my sales. And, I hope you can as well.

Thank you for listening to Swimming in the Flood. Resilient leaders face challenging currents and it is tough navigating, but with one tack or another we can get there together.

If you’ve got a couple of minutes, please check out my new website, www.trenttheroux.com. You can find my library of older podcasts. And, while you’re thinking of it – subscribe to the podcast. That way you can get developing resilient leader theories hot off the presses. Next week, I’m delivering a virtual speech to a conference of big data marketing analysts. The theme is Resiliency is a Reflex. If you’d like me to deliver a similar message to your organization email me at info@trenttheroux.com. I’d love to discuss some of the details.

36. Learn To Paint
Scroll to top