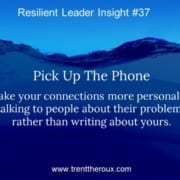 A Clockwork Orange is a difficult read. Difficult because some of the narration is a hybrid of Slavic and Cockney and difficult because of the rehabilitation scene of the protagonist, Alex DeLange. Alex is strapped to a chair, his eyes are forced open with wires, a screen plays directly in front of him for hours on end. Alex becomes emotionally distraught and exhausted. The scene is relentless and intense. Reading this scene made my mind tired and drained…kinda like how I felt after spending five hours on Zoom calls last Wednesday.

Zoom Changes How Meetings Are Run

COVID-19 has changed how we operate our businesses and how we interact with people. On the frontier of this change in communication is Zoom. I probably don’t need to describe what Zoom is because it’s become a verb in our lexicon like Google or Uber. Following shelter at home orders, Zoom traffic has grown. It is now reported that over 200 million people are using Zoom every day, that’s up from only 10 million per day in December!

We can now answer the age old question my friend Aretha Franklin has been asking (Who’s zoomin’ who? Take another look, tell me baby. Who’s zoomin’ who?) Well, it appears that everyone is Zooming everyone else. (Who’s zoomin’ who? Take another look, tell me baby. Who’s zoomin’ who?) Schoolteachers, office mates, business partners, supreme court justices, everyone is zoomin’ everyone else. My mother-in-law zooms all the kids and grandkids. They all show up in little boxes on her screen and she’s positioned like Alice in the Brady Bunch.
Zoom is on everyone’s lips since shelter-in-place orders starting being issued in March. Before the Corona Chaos, I might have been on one Zoom call per month. Now, I’m at five per week. And, I know that I’m still on the low end. I grew up in a different era. In the 1970s Zoom had a different meaning to school age kids. Zoom was an afternoon television show on PBS. It featured seven local kids and they rotated the kids around so they would have drug problems like the Mouseketeers. It featured kids like Donnie McGrath…from Southie. Nothin’ special other than the theme song. It was an ear worm. And, it’s still an earworm.

Let’s get back to business. Zoom, the videoconferencing service, may have seemed to burst on the scene overnight, but actually it was over 20 years in the making. Eric Yuan was one of the founding engineers of Webex in the late 1990s. Back then, Webex was a real-time collaboration company with a small number of employees. After Webex became the standard for collaboration it was acquired by Cicso and Eric Yuan became head of product development. Unfortunately, or fortunately, Yuan became disillusioned with Cisco’s lack of vision and willingness to invest in better video conferencing tools. Yuan left with some of his engineers to form Zoom.

It’s Zoom’s business model that intrigues me most and should for developing resilient leaders as well. Most of you will appreciate that it’s free. Right, free! Built in the cloud and priced using a “freemium” model that let’s everyone host a free meeting for up to 40 minutes. They make money by selling seats for larger audiences or for longer time periods. Think of this model like the guy selling Korean food at your local shopping mall. He’s standing out front holding some Korean BBQ chicken on a platter and offering you to take a toothpick and try. It’s the same model. He’s expecting that a certain number of people will be ready for a delicious meal at that moment. Zoom is expecting that companies will require their premium services and sign up. It’s a clever business model for many of us. Try a free appetizer…stay for a whole meal. (Zoom, Zoom)

Zoom is great for many reasons, but here’s the problem that I have. It’s hard to participate in a large scale Zoom call. I was on a Zoom call last week with six other participants. There was no real interaction. It felt like reporting. When it was my turn to speak, I gave a report. Then, it was the next person’s time to speak. This loses the personal touch of being connected. Yes, we can all see each other on the screen, but you can’t blurt out a laugh or question because someone else has the microphone. I find it annoying and highly unsatisfying.
Though the 1960s there used to be something called party lines. The phone company would wire houses so that they were connected to each other. If you were on a call to your girlfriend, Mrs. Kravitz from two doors down could pick up her phone and listen to your conversation. Back then, unless you were wealthy, everyone shared a phone line. Sometimes it feels like times never change. I was on a Zoom call with friends and it felt just like a party line. I sat back and listened to two people talking back and forth. I know Zoom is supposed to make you feel like you’re sitting around a campfire with your friends, but it feels more like high school religion classes. The teacher talking, one student always raising his hand and me thinking about how many more minutes before the bell rings.

The theory is simple here’s how it works. Jane Atkinson is the host of the Wealthy Speaker podcast and can be found at speakerlauncher.com. She’s a coach for speakers and one peach of a woman. One of Jane’s main thrills in business (and maybe in life) is to actually make a telephone call. Most of us are adroit at crafting emails or dexterous as blasting out information on social media, or now, creating Zoom calls. Jane would say that there is an art and a touch to actually picking up the phone and talking to someone. One to one. Here’s Jane explaining how she helped create this theory.

Right, there’s a personal nature to having a one-on-one conversation with someone. Think back to when you were in high school talking to your sweetheart over the phone. There was a mystery and intimacy about speaking without actually seeing each other. Zoom takes away some of that intimacy. It stands us up in a firing line waiting for us to shoot, reload and wait for our chance to shoot again. When I think of Zoom…..dammit…those kids won’t get out of my head now…When I think of Zoom…oh no…not this kid too. Does it feel like we are now in a world of Zoom zombies….Will someone please tell Aretha I know who’s zoomin’ who.

I know you agree with me 100%. Social distancing sucks. Zoom is a tool and like every other tool in your box, it has its proper use. If there’s someone you want to connect with…I mean truly connect with, call them, tell them that you miss them and that it won’t be long before we all can sit around a campfire and laugh about the bad haircuts we gave each other.

Thank you for listening to Swimming in the Flood. Resilient leaders face challenging currents and it is tough navigating, but with one tack or another we can get there together.

If you’ve got a couple of minutes, please check out my new website, www.trenttheroux.com. You can find my library of older podcasts. And, while you’re thinking of it – subscribe to the podcast. That way you can get developing resilient leader theories hot off the presses. Next week, I’m delivering a virtual speech to a conference of big data marketing analysis. The theme is Resiliency is a Reflex. If you’d like me to deliver a similar message to your office email me at info@trenttheroux.com. I’d love to discuss some of the details. (Oh please. I need to get my head out of the 1970s.)

38. Kiss The Girl
Scroll to top