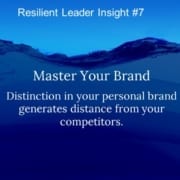 Have you ever been branded? Felt the hot iron pressed into your flesh. Was the logo more triple bar ranch or Nike swoosh? Maybe a harder question. Have you ever branded yourself?

(Music) Welcome to Swimming in the Flood; a podcast where develop the resilient leader’s mindset by navigating difficult currents in business. My name is Trent Theroux.

The Masters golf tournament just completed in fine form with Tiger Woods winning his 5th green jacket. More impressive to me than Tiger’s momentous win is how August National has positioned itself to be the finely manicured backyard of heaven itself.

The Masters projects itself as the idyllic Eden of golf. The have very specific rules about what the spectators and media can do. No cameras, no cell phones, no folding chairs, no running these are some of the rules for the patrons. Yes, patrons not spectators. The media must call the people who are spectating the event Patrons. The media cannot call the thick grass “rough” but rather “the second cut.” Front nine and back nine are out. It’s first nine and second nine. These rules are intended to set Augusta National and the Masters apart from every other golfing event in the world. And, it is enormously effective. It’s so effective that people – and I’m talking a lot of people – want to have their ashes spread over the course when they die. How often does that happen at a Best Buy?

The Masters is prodigious in the development and protection of their brand. For the most part so is every other corporate entity. Millions of dollars are spent developing a precise brand that it compels companies to defend the brand’s honor. And, the Masters is no different.
Gary McCord is a golf analysis for CBS Sports. Gary’s job requires him to walk with the players and provide on course analysis. During the Masters, after watching several golf balls roll off a green and backwards into a water hazard, McCord commented that it appeared the greens were so slick that they might have been given a bikini wax. Hysterical, right? The Masters committee didn’t think so. They banned McCord from the broadcast and the course…that was in 1994…twenty-five years ago. Twenty-five years of protecting their brand.

I’m going to go off on a tangent here. I had lunch with a gentleman named Mike Tranghese. Mike was formerly the President of the Big East conference and sat on the board of the College Football Ranking Board. A big guy in sports. He was telling our table a story about an opportunity he had to play Augusta National with a close friend, Dave Gavitt. Gavitt was a long time coach of Providence College basketball (Go Friars!) and the founder of the Big East conference. At the time, Gavitt was the President of the Boston Celtics. Tranghese and Gavitt played their round at Augusta and offered to their host to tip the caddies. The host told them that money was not allowed at Augusta. It was one of the strict rules. They couldn’t give the caddies a tip because it was charged directly to the host. Gavitt suggested that he send the caddies some Boston Celtics gear as a thank you. The host accepted and said that he would hand the gear to the caddies when it was received. Gavitt called his assistant that night before dinner and instructed her to send two of everything with Celtics logos down to Augusta. Two playing jerseys, hats, sunglasses, long sleeve, short sleeve, sneakers, sweatshirts, sweatpants…you get it everything.
The package arrived the next morning and was delivered to the caddies. The caddies loved the gear. A couple of weeks later the host sent Gavitt a copy of the Augusta Chronicle, the local newspaper. On the front page, above the fold was a story about two drug dealers who were arrested the night before. There was a picture of both of them in handcuffs being escorted by police. They were Gavitt’s caddies and they were dressed head to toe in Celtics gear!

What made this story hysterical to me is that they were wearing Celtics gear. A storied brand besmirched by a drug story. But, equally amazing is no mention that they were caddies at Augusta National. That’s good brand management!

Let’s take a turn from corporate brands to something else. Tom Peters, the author of In Search of Excellence, coined the term Personal Brand in 1997 by challenging leaders to become a little like big corporate brands. Strong corporate brands have enormous intrinsic value. But, Peters argued that you can create your brand on a local level.

So, what is your personal brand? We know Steve Jobs – black turtleneck & jeans. Tom Wolfe always adorned a white suit – even after Labor Day. Tiger Woods wears red on Sundays. We recognize these leaders by their trademark uniforms. But personal branding is more. It is the unique combination of skills, experience and personality that you want the world to see. As a resilient leader what brand do you want to portray? How do you want the world to see you?

I am now going to give you my unscientific, non-peer reviewed, resilient leader theory on mastering your brand. Are you ready? Got your pencils out? Here’s it is. Be Carl Spackler. You heard it. Be Carl Spackler. This theory has been endorsed by at least one fuzzy, precocious little gofer.
To understand the theory you first need to understand who Carl Spackler is. Spackler is the assistant greens keeper at the Bushwood Country Club and is famously portrayed by Bill Murray in the movie Caddyshack. Spackler is in need of a good bath and a clean tee shirt. But, he is uniquely identifiable in the movie. His obsession to eradicate the course of the gofers, not the golfers as he originally understood, is a testament to drive for perfection – or insight to insanity. What makes Spackler’s personal brand unique and appealing is that he does not bend to the norms of the snobs around him. He understands his role on the golf course and it true to both his brand and his character. How often have you witnessed a leader change positions like the wind? I have. And, you can too in the next presidential election. A brand endures the whims of noise around us. Carl Spackler is the type of guy that doesn’t get ruffled by outside influences. He just goes about his day eating any Baby Ruth he can find.

This is critical for resilient leaders. What skills, experience and personality do you want the world to see?
I met a gentleman a few months ago named Phil Gerbyshak. Phil is a sales trainer who led a seminar I attended on better uses of LinkedIn. I met Phil a couple hours before he spoke, without knowing that he was going to speak. The first impression I had of Phil were his distinctive orange glasses. They were bright. They were fun. They let me know instantly who I was talking to and gave me immediate insight as to his character. When Phil stepped in front of the audience, I was already sold. I was sold before he started speaking because of the way he projected his personal brand when we met.
As Jeff Bezos, founder and CEO of Amazon, once famously said, “Your brand is what people say about you when you are not in the room.” Phil is not in the room and I am telling you that his brand stuck with me – two months later It makes me wonder how my brand sticks. What do people say when I’m not in the room? I guess I’m hoping that people don’t call me a Cinderella story.

Folks, thank you for listening to Swimming in the Flood. Resilient leaders face challenging choices and it’s tough navigating those currents but with one tack or another we can get there together. You can find more podcasts and videos on my website at www.trenttheroux.com. If you enjoyed today’s show, please tell a friend, leave a comment…subscribe. I would be happy to discuss speaking at your next conference or event. Just write to me at info@trenttheroux.com. I look forward to getting together next week. See ya.