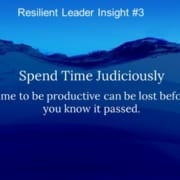 When was the last time you were locked in a cell? Held there against your will. How did you spend your time? Was it productive or filled with anxiety?

Quick show of hands. How many of you have been in a meeting that you didn’t want to? Looking through my magic mirror I can see a lot of you with hands up. There are endless studies, blog posts and rants about the proper way to run a meeting. Which means to me that there are an endless number of managers who are holding their employees prisoner in meetings. Set a time limit. Create an agenda. Work toward outcomes. These seem simple yet meetings often go off the rails. I believe that these types of managers are narcissistic. They put the ME in meeting!  I’m sure that everyone can name a manager like this. But has it ever been you? Are you the one that the blogs and posts and studies have been about? None of us would ever admit that we were. But take this test. The next time you are running a meeting view the prisoners around you. Are they getting itchy? Ready to scream Attica! Attica!

I might go off on a tangent here. My wife, toddler daughter and I came home on a Wednesday night. We owned a two-family and the downstairs tenant met us on the stoop. She said that the police were there looking for me. Now, I was an Eagle Scout growing up. Of course, the police wouldn’t want anything more from me than a donation to the Police Auxiliary League. I called the station and the dispatcher was shocked when I told him that I was home and would be willing to wait for a patrolman to come by.

Thirty minutes later, two patrolmen showed up at my front door and I invited them upstairs into our apartment to speak. Can you imagine my utter surprise when they told me they were not raising funds for orphan children or the police athletic league, but rather were informing me that I had an outstanding parking ticket from five years ago? Apparently, I had parked in a handicapped spot in the long term parking lot at the airport. Because the lot was at the airport the laws are enforced by the State Police and my failure to pay led to a bench warrant for my arrest. I was willing to pay them right there for the ticket, but they told me no and that I would have to settle it with the judge in the morning. Handcuffs are not fun. They hurt. And, I have very tender wrist skin. The policemen were kind and allowed me to be cuffed with my hands in front on account that I called them to come get me. That, and I was crying.

They processed me and put me in my own cell. It was about midnight, but I wasn’t tired. However, I was cold. The put me into the cell wearing only a tee shirt and jeans. Maybe the veterans know that you’re supposed to wear a long sleeve shirt for these events. Sitting on the metal bed I started to whistle to pass the time and found the acoustics were incredible. My whistling reverberated through the compact room. I was able to whistle a beautiful version of both strings and woodwinds of Beethoven’s 9th. Prince’s “When Doves Cry” came off as if I was wearing purple myself. I whistled away for several hours until my nerves relaxed, and exhaustion overcame me.

The next morning, they opened the cell door and put me into the hall for transport. They cuffed me next to a man who had a neck tattoo that resembled Edvard Munch’s Scream subject. He glared at me and asked, “You the dude that been whistling all night?” The screamer seemed to be pulsating on his neck. Dear God, I was going to get shivved on my first night in prison because I didn’t pay a parking ticket. Before I had a chance to respond and accept my fate, the police ushered us out to the courtroom.

I am going to give you my unscientific, non-peer reviewed theory on being held prisoner. Are you ready?  Got your pencils out? Here it is: Whistle while you work.  You heard it: whistle while you work. It’s been endorsed by at least six bearded, diminutive miners that I know of. The concept is that sometimes we need to accept that we are not in our ideal working or living environment. We can complain to coworkers or bitch to family, but it doesn’t get us out of the present situation. Sometimes we are held prisoner.

Let me give you another example. The Reverend Doctor Martin’s Luther King Jr had many notable impacts on the world, I am most impressed with his Letter from Birmingham Jail. “Injustice anywhere is a threat to justice everywhere.” This well-articulated and passionate plea still resonates the world over.

King wrote this from his cell and said, “What to do when you are alone in the dull monotony of a narrow jail cell?” He was right. How often have you tried to compose a letter or email only to be distracted by beeps, pings, knocks? It’s frustrating and unproductive. The Nobel Prize winning story One Day in the Life of Ivan Denisovich was written from a Soviet prison. I am not advocating that you commit a felony or misdemeanor to earn yourself prison time so that you too can produce enduring thoughts. No. Here’s a more practical example: I took a three-hour flight recently to a business conference. I was in the middle seat. On my left was a woman who had a movie playing on her iPad. On my left was a man who was staring at his cell phone intently playing Candy Crush. Me, I had my journal, a thought leadership book and the Wall Street Journal crossword puzzle. I was ready for the flight. I don’t mind being held prisoner for three hours on a flight. In fact, I look forward to the seclusion. I whistle while I work. Movie queen was watching a Julia Roberts double feature. Candy crush man spent the entire flight crushing candy. And I was making the most out of my prison cell.

If we want high-level thinking, we need to find our own cells. A place where we can quietly think and focus. Try this for me. When you’re next driving home from work turn off the radio. I know this is going to be hard. Drive in silence. Allow your mind to wander. You’ll be amazed at where your deep thoughts lead you if they’re given time to roam.

Folks, thank you for listening to Swimming in the Flood. It’s tough navigating life’s currents but with one tact or another we can get there together. You can find more podcasts and information about my speaking engagements on my website at www.trenttheroux.com.  If you enjoyed today’s show, please tell a friend, leave a comment or subscribe. I look forward to getting together next week.

04. Where is the Blame
Scroll to top