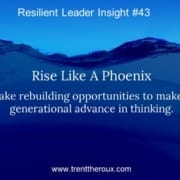 I am writing this podcast while watching the countdown for the SpaceX Crew Dragon historic launch.  It will be the first commercial manned flight into space.  It will also be the first American manned launch since 2011.  The astronauts just announced that they are a “go” for launch.  I can’t lie.  I am stoked about this.  I’ve always had a fascination with the science and mathematics behind space travel.  What makes this flight unique is that it is the first launch of a new vehicle in thirty years.  And, this flight is the gateway for Developing Resilient Leaders to book their ticket into space.  The flight program stopped flights nearly a decade ago, but now they are reborn.

The two astronauts are sitting back in their seats staring into the sky.  Their hands are folded like they are saying a prayer before dinner.  We are at T-45 minutes.  I wonder what those two men are thinking as they wait for launch.  Maybe they are like my kids and playing a game of I Spy with My Little Eye.  “I spy with my little eye something blue…”

Many states are reopening this week, coming back online after nearly 10 weeks of dormancy.  The biggest question on most people’s lips is what will it look like?  Will life be normal or will there be a new normal, a better normal?  Are businesses going to be the same or are their going to be changes in the way we operate?  I’m not limiting that question to wearing masks and sitting at restaurant tables six feet apart.  Rather, I’m wondering what is going to be different in a positive way about this three-month hiatus.

Oooh.  Update.  They are loading the propellant.  Thursday’s launch was scrubbed at the last minute because of weather.  Today looks great.  Back to the podcast.

This isn’t the first time that businesses have had to make changes following a dramatic event.  In 1995, a fire in Lawrence, Massachusetts at Malden Mills created a learning event for all managers going to business school.  3,000 union jobs were at risk because of the damage to the factory.  Worse, the fire came two weeks before Christmas, affecting employees both emotionally and financially.

The fire devastated the building, but the CEO, Aaron Feurerstein announced two amazing items.  First, that the company would rebuild the textile factory rather than take the opportunity to send jobs overseas.  Second, he offered to pay all wages for the next 30 days, which turned into 90 days, and he covered all benefits for 180 days.  During a 60 Minutes interview, Feurerstein said “I think it was a wise business decision, but that isn’t why I did it.  I did it because it was the right thing to do.”  It takes tremendous courage to go out on a limb like that.  It takes the bravery that many Developing Resilient Leaders display in their normal courses of business.

Unfortunately, the benevolence shown did not pay off for the company as less than a decade later it was in bankruptcy, primarily because of the heavy debt burden of rebuilding.  So, should companies rebuild in times of crisis or protect their remaining assets and search for other opportunities?  I can see many small business owners pondering this question right now – salon owners, restaurant owners, bar owners, lap pool owners.  They all need to consider whether their business is worth investing in following the COVID Chaos.  Should they keep their doors closed?  Should they take on the risk and regulations of reopening?

The Fire of London Creates a Rebirth

The theory is simple here’s how it works.  On September 2nd, 1666, the city of London was ravished by a fire.  Over a quarter of the city was destroyed, over thirteen thousand houses were ruined and over 100,000 people were homeless.  The fire of London changed the city forever – in some ways for the positive and in others for worse.  I’ll start with the better.  The fire jumped from house to house because each was built with timber that had been soaked or treated with some oil.  There was no viable way to pump water from the River Thames onto the streets to help tame the blaze.  The fire needed to flame out on its own.

When the city started rebuilding there were ordinances that all new construction should be of brick and stone to reduce greatly the chance for a repeat event.  The government used its authority to compel land owners to change what was normal and create a “new” normal.  I’m sure that the owners of the quarries and the brick makers were thrilled at this government intervention.  However, the change was positive for the community and for the city as a whole.  As you walk along sections of central London, you can see many of the rebuilt buildings still standing.  You can see the uniformity of the stone and bricks as they were rebuilt successively.  The government edict served its purpose by reducing the potential for a second devastating event.

Remember that I said that there was something good and something bad.  Okay.  Have you ever walked through the streets of London?  It’s much easier if you have six pints of Bellhaven in your belly first so you’re already staggering.  Walking the crooked and winding streets requires a keen sense of balance or to be completely snookered where you are just meandering aimlessly.  The city officials floated the idea of modernizing the streets in the downtown area into the evolving perpendicular model of avenues and cross streets.  What we have come to like and enjoy in cities like New York and Chicago could have happened in the world’s largest city except that the landowners were unwilling to change their plots.  Landowners were offered the same amount of land, but stubbornly refused to change the dimensions of their plots.  This stubbornness resulted in leaving the roads in the same drunken weaving pattern that exist today.  And remember, this was before someone had the bright idea to drive cars on the wrong side of the road!

In my opinion here is the best that came out of the fire of London – St. Paul’s Cathedral.  Prior to the conflagration, St. Paul’s was in a poor state of repair before the fire damage.  Dr. Christopher Wren was tabbed to fix the dilapidated cathedral.  But, rather than press forward with repairs to the building, Wren reimagined the cathedral.  Wren took a generational leap, a quantum leap in architecture and designed the building to have a dome rather than the traditional peaked ceiling.  The dome reached a height of 365 feet symbolic of the earth’s revolution around the sun.  The most significant piece of trivia about this evolution is that Wren never saw a domed building before.  He used the Hagia Sohpia as a model but had never actually seen a domed building.

According to Adrian Tinniswood’s book “By Permission of Heaven.”  Wren asked a workman to bring him a flat stone to use as a marker for the masons.  He was given a fragment of a gravestone containing the single word RESRURGAM, meaning I will rise again. From Matthew 27:63. Wren decided to place a large phoenix above the south transept hovering over the word as a sign of London rising from the ashes of the Great Fire.

I’m excited to see what evolutions come from the Corona shutdowns.  How will Developing Resilient Leaders rise from these ashes?  What previously impossible achievements will be made because of the reboot?  How can we use this time to reimagine our businesses and our lives?

Ohh there it goes.  The Falcon rocket is lifting off.  It looks a little like the rocket we watched in the MTV commercials during the 80s and 90s.  They just passed Main Engine Cut Off and ditched the Falcon.  Can you believe that they are now going to steer the rocket back to earth and land it on something equivalent to an inflatable pool chair?  The Crew Dragon is now in orbit.  They made it safely into space.  This spaceship is nothing like what we’ve seen before.  Isn’t it cool what innovations we can dream up when we rise from the ashes?  My good friend David Bowie would have been impressed.

If you enjoyed this episode I ask you one small favor.  Please suggest it to a friend.  Word of mouth is proven to be the best method of advertising podcasts.  Our network has grown over this past year of producing podcasts and I thank the constant listeners for their support.

There are some new videos posted on the website.  Please take a minute and check them out at www.trenttheroux.com

Thanks for taking the time to listen.  See ya.