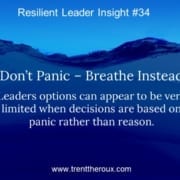 Have you ever run with the bulls? Put on your white shirt, mix into the crowd, listening to their screams and grunts in every language imaginable, laced up your shoes, waited for the opening bell to ring then zoomed off. Zigging and zagging trying to find the best opportunity to get through the maze and into the crowed arena where thousands of fans are cheering? Or, did you sell off your 401k before the rally began?

In this trying week, developing resilient leaders may want to listen to something more relevant than my traipsing through the streets of Pamplona. Okay how’s this.

The Dow Jones Industrial Average closed below 20,000 today. The last time it closed that low was…when? I’ll give you a heartbeat to guess. When was the last time that the Dow closed under 20,000? The answer is three years ago. That’s it! Three years ago. The pandemonium in the markets over the past two weeks is violent enough to scare even hardened financial traders. Let me offer a lens for which developing resilient leaders can view these events.
My first experience with markets crashing was in 1987. I was waitering on a Monday evening in college and the entire news hour was dedicated to the 22+% drop in the Dow that one day. Truthfully, I knew something big was happening, but I didn’t have any money in the market so I didn’t feel the effect so much. My next experience was in 2001. During the year prior, every stock that was tangential to dot com or tel/comm was doubling every other month. I speculated, guess right, sold off and used the proceeds to buy a car. Then, the Federal Reserve chairman, Alan Greenspan, testified that the market were exhibiting irrational exuberance. The market crashed and so did my modest investments. It was the first time I heard the joke, “my 401k is now a 201k.” In 2008, we hit the granddaddy. The great recession sent millions of people to the unemployment line as the underpinnings of the US economy were fractured and without support. I watched what I thought was a solid retirement nest egg shrivel with each passing day. Now the Coronavirus. I’m on the back nine of my working years and my opportunity to earn is limited by the number of years I have to invest.

Here is my point in bringing up these four examples. Where ever you are on the spectrum. Just starting to save, having a little money in your pocket, steadily building your nest egg or nearing your retirement years, where ever you are I guarantee you that you are thinking one thought today…should I sell today to cut my losses. The market is falling apart. Everything I own is now half off. Should I get out now before the other shoe drops? In a word, this is panic. Panic about the unknown, the unforeseeable and the unexplainable. Panic is the sudden uncontrollable fear or anxiety often causing wildly unthinking behavior. Google panic and you will find plenty of reasons to panic…and I’m not talking about panic rooms or Panic, at the disco!

I am now going to give you my unscientific, non-peer reviewed, resilient leader theory on panic. Are you ready? Got your pencils out? Here’s it is. Drink a Corona. You heard it. Drink a Corona. This theory has been endorsed by local liquor stores around the country.

The theory is simple here’s how it works. It is true that we are living in an exceedingly complicated time. Every norm that we’ve accepted in our lives is being questioned this week and we are all being asked to change. My magic mirror shows me that there are many of you that are not comfortable with some of the changes. Folks, change is going to be inevitable in the coming weeks. Pop open a corona, squeeze in a lime and enjoy some of the early spring sunshine. There will be sunshine and the days will get better. It is true that the bull run of the stock market is over. But, you only experience a loss if you sell. I’ll say that again. You only actually lose money in your accounts if you happen to sell. The professional money managers already took their money off the table. They are now waiting for you to panic and sell your stocks so they can buy at rock bottom prices. The greatest gains in the market followed each of the three examples I gave you. And, I fully expect that this market will start running again when the virus panic subsides.

Developing resilient leaders now is the time to demonstrate our leadership by not panicking. These are trying times, but save the panic, and the fear and the sweats and the anxiety when you are in mortal peril, like when you are actually running from a bull.

Speaking of which. (I’m so glad you asked) I first learned about the running of the bulls when I was reading The Sun Also Rises, by Ernest Hemmingway. The book was the type where you’d start reading on a Monday and finish over breakfast Tuesday morning, a complete page turner and it inspired me to be among the throngs of revelers in the steamy July Pamplona party.

We arrived by bus and witnessed a scene straight from the twilight show. Thousands of people were milling around a central park drinking sangrias straight from the jug. Each was wearing the exact same clothing; white shirt, white pants, red scarf and a red sash. Some ladies may have exchanged a long white skirt for the pants otherwise they were the exact same. Thousands of people singing in the streets, meandering in small groups, making new friends, drinking more sangria and singing louder.

Hundreds of the brave lined up on the corridor to wait our opportunity to run. Hundreds of mostly men with the same clothing compressed together in a very narrow chute. The course is lined with a wooden railing fence. Actually, it’s double lined so you can jump over the first fence as the bull is charging you, but the bull won’t come near the crowd pressed against the second fence. The police mingled in the pre-dawn crowd pulling out drunks who haven’t stopped partying for the last few nights. The last thing we all need is a staggering slouch knocking us down like 10-pins.

The bulls come from behind two very large doors. At 8:00am a rocket is launched announcing that the large doors are open. I felt this immediate surge in my back pushing me forward and downward a little. Then, comes the second rocket about two minutes later. This rocket announces that the six bulls were released and pandemonium ensues. The densely packed crowd manically surges forward and you try to shuffle your feet to keep your balance.
Out of all this noise and commotion, I was stunned that I could pick out the snorting of the bulls. Their breathing was labored and violent as they stampeded down the cobblestone street. The crowd disperses a little to the sides to get out of their path, and their horns. Some jackasses try to dance in front of them. Secretly, I was hoping that they would get gored. I turned a corner and was welcomed with a little more room on each side. The run is about a half a mile and winds through a few streets as it leads into the arena at the end of the longest stretch.

Panic, while we are speaking of panic, I can tell you that I was seriously questioning my decision making as I could feel the bulls approaching me. I measured how quickly I could jump to safety if I needed, but at the same time, there was exhilaration. The nervous energy of not knowing how this would work out send electricity through my veins.

The bulls were sweating as they approached. Their backs glistened with sweat. Several people jumped onto the rails for safety. The bulls were herded together tightly in a formidable pack. Snorting. Grunting. Bearing down on where I was running.

The street was wider when the bulls caught me. They had their lane and I had mine. The second after the bulls passed, the exhilaration of running began to ebb. I could feel my heart calm. My pace was slower. A sense of safety set in and eased my mind. The panic passed, but the memory has stayed with me for a decade.

The panic will pass in the markets and in the world. Soon, we will be left with only a memory of how this affected us. Reasonable decisions now will serve us best in the future. If you are on edge and considering a rash decision, I suggest that you drink a corona. Or, if you’re feeling adventurous, put on a white shirt, white pants, red sash and we can share a sangria together.

If you’ve got a couple of minutes, please check out my new website, trenttheroux.com. And, while you’re thinking of it – subscribe to the podcast. That way you can get developing resilient leader theories hot off the presses. If you’ve ever run with the bulls please send me an email at info@trenttheroux.com. I’d love to hear how you made it.
Thanks for taking the time to listen. See ya.