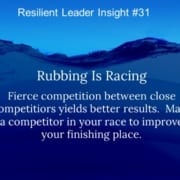 I was in complete awe watching the fiery finish to last week’s Daytona 500. For those of you who are unaware of this story let me start by saying that Ryan Newman walked out of the hospital, under his own power, 42 hours after the crash.

In the final lap of the Daytona 500, the remaining racers were tightly bunched and zooming across the backstretch in their effort to win The Great American Race. Ryan Newman car was hit in the rear sending it flying into the air. Then, the car bounced off the rail – in mid-air and flipped. On its way down, another car struck Newman directly in the driver’s side door. Newman car was skidding down the track, upside down, when it burst into flames. All of this happened at 200 miles per hour. Newman was trapped inside his car ablaze waiting for rescue.

It makes me wonder if we in business race at top speed, almost out of control, one little nudge away from a fiery exit.

The global commercial aircraft market is dominated by two manufacturers, Boeing, an American company and Airbus, a European conglomerate. This intense rivalry affects everyday passengers in virtually every way in the skies; how much leg room you have, how long you can fly between stops, how much you pay for your seat. The heated competition between these two companies sets an example of the best and the worst in corporate competition. Here’s an example.
Many of you are aware of the failures of Boeing’s 737 MAX aircraft and their two fatal, horrific crashes. What many may not realize is that these crashes were a direct result of the fierce competition with Airbus. The 737 family are Boeing’s most produced and best commercial airplanes, but it has several disadvantages when compared to Airbus’ A320, most notable of which was fuel consumption. Labor contracts fix the costs to operate planes as most major carriers have unions and negotiated contracts.

In 2010, Airbus developed a version of the A320 called the A320neo, with neo representing “new engine option.” This new plane provided airlines with additional fuel savings and it ran on the same airframe, thus reducing the need to recertify or retrain pilots.

This event sent ripples through Boeing, threatening the precarious balance in this duopoly. The engineering challenge that Boeing faced was that their wings were lower to the ground than the A320s. They made this engineering decision in the ‘70s. And, while good for many decades, it was not able to handle larger engines without a complete redesign. The A320 was already higher and the larger neo engine easy fixed onto the airframe.

Boeing had a choice. They could take several years to redesign the airframe to better accommodate larger engines. While they travel down this path they would most likely need to deeply discount their current 737s to maintain their competitive position against the superior A320. Or…or…they could find a way to put the bigger engine onto the current 737 frame – which is what they did.

Boeing found that they could put larger engines on the planes as long as they moved the engine more forward on the wing to get more clearance. Making this change affected the aerodynamics of the plane. It didn’t make the plane unflyable. No, the plane would fly perfectly fine. The issue was in the instrumentation. When the plane made a high angle of attack, the computer system would create a warning which engaged the autopilot to correct the error. But, there really wasn’t an error. The autopilot system only thought there was. Pilots who could disengage the system were fine. The two pilot crews who couldn’t crashed.

Let’s remember, the reason the pilots needed to override the autopilot system is because the plane had bigger engines in a different location than was programmed into the computer. This was a direct result of the improved engine from Airbus. The intense competition between Boeing and Airbus and their tit-for-tat competitive moves is what makes businesses great. It’s unfortunate that Boeing played a little loose and fast to stay in the game.

Competition drives innovation and better performance. Sometimes it drives us to be jerks. Regular listeners, you’ve heard me describe my competitive prowess in many podcasts in one incantation or another. I can summarize how I view competition in this sentence. If I’m standing at the urinal and someone comes and stands next to me…it’s a race. Pure and simple.

I am now going to give you my unscientific, non-peer reviewed, resilient leader theory on competition. Are you ready? Got your pencils out? Here’s it is. Rubbin’ is racing. You heard it. Rubbin’ is racing. This theory has been endorsed by none other than Cole Trickle and Tom Cruise.

The theory is simple here’s how it works. Cole Trickle was a hot new NASCAR driver with an equally hot temper and this attitude get him into trouble not only with other drivers, but members of his own team as well. Let me stop for a second. Do we all appreciate that Cole Trickle is a fictional character from the movie Days of Thunder? He’s played by Tom Cruise. Wait, not accurate, he’s over acted by Tom Cruise. And, while the over acting is very cheesy there are some great scenes about the intensity of the competition. Harry Hogge, that’s Cole’s crew chief here is talking to Cole during a race.

Harry: Cole, you’re wandering all over the track!
Cole: Yeah, well this son of a bitch just slammed into me.
Harry: No, no, he didn’t slam you, he didn’t bump you, he didn’t nudge you…he rubbed you. And rubbin’ son, is racin’.

Let’s talk about how this Boeing and Airbus situation is getting to rubbin’. There are two primary jet engine manufacturers; Rolls Royce and GE. Presently, Rolls Royce supplies all the engines for Airbus and GE dominates the Boeing products with a 63% market. Here’s the rub, because the 737MAX has been grounded for nearly a year, GE is left with a significant amount of slack manufacturing capacity. Enter Airbus. Airbus is enticing GE to produce engines for them. This is great for GE as the Boeing issues are affecting profitability. Rather than leave their plant idle they can produce AND diversify their customer base in one shot. Because of the long lead nature of making airplanes, lengthy contracts need to be in place because the cost of switching suppliers is expensive.
Meaning, Airbus can now take advantage of the grounding of the 737MAX by tying up their tier one supplier of jet engines. Even if Airbus takes away a small amount of GE’s capacity, it will be that much less that Boeing can rely on when they are back in the air. This is absolutely beautiful and what makes business strategy so beautiful.
How does this story relate to resilient leaders? In many ways, it’s pleasant to think about creating win-win situations. However, sometimes you are in direct competition with someone or with another company. When that happens, we need to be prepared with the correct strategic moves to take advantage of a weakness. Please don’t think of this as preying on the weak. It may be more about accentuating your strengths to your benefit.
Here are some thoughts on competition from Dale Earnhardt. “Finishing races is important, but racing is more important.” But a better one may come from Dick Trickle. Just for your information, that’s the guy’s actual name, Dick Trickle. His mother named him that. Mr. Trickle said, “Why would you race if you weren’t going to be up front?” Amen to some healthy competition.

I will be giving the keynote speech at the US CFO Conference being held at the Boston Marriott – Burlington on the evening of March 2nd. Search thenetwork-group to find tickets.

If you’ve got a couple of minutes, please check out my new website, trenttheroux.com. And, while you’re thinking of it – subscribe to the podcast. That way you can get developing resilient leader theories hot off the presses. If you would like to discuss your next speaking or training event please send me an email at info@trenttheroux.com.