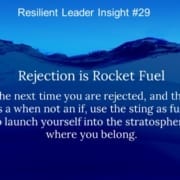 We were walking in Wayland Square on the east side of Providence on an unseasonably cool June morning. Just poking our heads into shops, I graduated college three weeks earlier and didn’t have a dime to buy anything of value. It was our third date, our fourth meeting if you count the time we were just kissing in her car. I don’t remember conversing about anything in particular it’s normally small talk for people in their early twenties getting to know each other. Until, she told me that her therapist thought it was best if she wasn’t dating. My head snapped to attention from the bakery window I was staring into. “What?” “My therapist said it was best if I wasn’t dating.” It took me a minute to process this sentence given that we were actually on a date and my response was absolutely perfect – at least I think it was. I said, “My therapist told me that I should have that chocolate brownie.” And, I walked into the store to buy the treat. Well, how would you have handled the rejection?

In his book Emotional First Aid, Guy Winch describes that rejections can cause four distinct psychological wounds, the severity of which depends on the situation and our emotional health at the time. Specifically, rejections elicit emotional pain so sharp it affects our thinking, floods us with anger, erodes our confidence and self-esteem, and destabilizes our fundamental feeling of belonging.

In my case, the rejection wasn’t tragic and the wound was healed with a chocolate brownie. In other cases, rejection can lead to more harmful results and as developing resilient leaders we need to prepare ourselves with coping mechanisms. Because, trust me, rejection is coming.

Rejection confronts everyone in some manner or another. Ask an author or an actor how many times they’ve been rejected. Those two wear rejection like a badge of honor. Herman Melville’s book Moby Dick was rejected many times. One publisher wrote to Melville, “We must ask, does it have to be a whale?” That was a serious rejection considering that the book was about a whale. Other rejections may still sting, but the rejecter knows it will sting so they try to soften the blow. Or maybe you got rejected by this letter, “You name has been submitted to us along with your photo and I regret to inform you that we will not be able to use your body in Playgirl. On a scale of 0-10 your body was rated negative two by our panel of women ranging in ages from 45-55 years old. We tried to assemble a panel of women in the age bracket 20-35 but we could not get them to stop laughing long enough to reach a decision. Should the tastes of American women ever change so drastically that bodies such as yours would be appealing and appreciated in our magazine we will be certain to notify you.” How’s that for stinging? I was starting to feel personally a little objectified until I read the P.S. line. It reads, “We do commend you for your unusual pose. Were you wounded in the war or do you ride a bicycle a lot?” Maybe the guy had the rejection coming to him.

In 2011, AT&T attempted to acquire T-Mobile for $39 billion. At the time, AT&T was a distant second in total subscribers to Verizon. The merger would have made them number one in the market place by adding an additional 25% more subscribers to its base. The federal justice department rejected the merger and brought a lawsuit against AT&T claiming that the acquisition would lead to higher prices and fewer choices. AT&T walked away from the deal later in the year. But, they did not walk away from their growth strategy. Understanding that greater consolidation in the telecommunications market was blocked, they turned their focus to peripheral industries. In 2015, they acquired DirectTV. In 2018, they acquired Time Warner. AT&T did not accept their rejection. They made something better because of it.

The theory is simple. Here’s how it works. By acknowledging that we are going to be rejected at some point, or at many points, we can prepare ourselves in advance to manage the emotional stress from the rejection.

In 1984, during the fall of my senior year of high school, the New England area was transfixed with Boston College football. Doug Flutie was scrambling and chucking the pigskin towards the Heisman Trophy. On a slow Saturday night at the Cathay Dragon, the restaurant where I worked as a busboy, I watched the Hail Mary Flutie threw to Gerald Phelan against the University of Miami. Flutie spun through the backfield avoiding defenders like a matador. He heaved the ball towards the end zone and the ball’s trajectory perfectly guided it over the wall of waiting defenders and into the belly of Phelan. I cheered and nearly dropped my tray. That pass solidified my desire to attend Boston College the following year.

Unfortunately, for me, one hundred thousand other teenage boys were watching the same game and had the exact same thought. During my campus interview with the Boston College admissions office, the officer told me that applicants increased by a factor of five that year. In addition, “wasn’t it amazing what a good football year can do for admissions?”

My A- grade average and 1200 SAT scores lacked the cache to walk into Boston College. Being an Irish Catholic wasn’t going to put the “approved” stamp on my application either. I needed to appeal to the Athletic Department for help. Heck, if football players who read at a third grade level can go to Boston College free, a decent local swimmer that will actually attend religion class should get on the roster.

I met with the Boston College swim coach and we talked for a few minutes about the program and its lackluster history. I told him of my Flutie problem and inquired what help he could give to a young backstroker who was ready to bleed Crimson and Gold. “Nothing” he replied. Nothing. The answer was cold and curt. He told me that he already had a solid backstroker and two more were already coming in through early admissions and he didn’t need another. My short-lived overly hyped dream of becoming a Boston College Eagle was over. My moderate grades and scores proved not to be enough for the “Flutie Bump.”

I enrolled at Providence College the next year and quickly began to bleed Black and White, eagerly awaiting the dual meet with Boston College in January.

January came and the team traveled to Boston’s Chestnut Hill. The first race of the dual meet was the 400 Medley Relay, started with a 100-yard backstroke. Taking my mark in the middle lane, I looked to each side of me to try to identify my enemies. To the left was a boy who looked to be my age. He must be one of those wicked smaht early admission pukes. To my right was their veteran, John Blood. I stared the longest at him. The race was over in a flash. I beat both Jesuits by more than a body length. The 200 back, later in the meet, was a closer affair. John Blood and I were nearly even at the 175 yard turn, but I had a little more to finish the race and beat him by a full second. At the conclusion of the meet, the two teams stood in line to congratulate each other. When I shook the Boston College coach’s hand, I employed the strongest grip I possessed and refused to let him go. I asked the coach if he remembered me. “No” was all he said. “I interviewed with you a year ago and you told me that you didn’t need any backstrokers. Well, I just smoked your backstrokers today and I’m not going to lose a race to you for the next four years.” I released my grip and walked away. Nothing else to say and never looking back.

True confession. I was a bit melodramatic when I was a teenager. Let’s blame it on the acne.

Over 30 years later, I can still feel the sting of that rejection. But, it doesn’t erode my self-esteem, or destabilize my sense of social belonging. No, it fuels me with anger…rage. To this day, I root against the Boston College Eagles whenever they play. I turned the rejection into rocket fuel and burned it to fire myself to into a higher orbit.

If you’ve got a couple of minutes, please check out my new website, trenttheroux.com. And, while you’re thinking of it – subscribe to the podcast. That way you can get developing resilient leader theories hot off the presses. If you would like to discuss your next speaking or training event please send me an email at info@trenttheroux.com.
Thanks for taking the time to listen. See you next time.