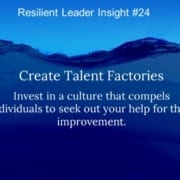 The University of Alabama Crimson Tide’s Men’s Football team is ranked number 1 in the country and is in search of its sixth national championship in the last decade. The head coach Nick Saban has been described as a football genius and a hard driving coach. Like most businesses, you would assume that Saban has built a finely tuned machine within his ranks so that he is able to produce nation’s best quality results year after year. You would expect that from every top echelon company. Solid and consistent leadership throughout the ranks so they can produce consistently superior results. However, the opposite is true with Alabama. What if I told you that all the offensive coaches from last year’s national championship finalist team quit and Alabama is still ranked number one this year?

Douglas Ready, senior lecturer at Sloan School of Management at MIT conducted a study of 40 international companies that he considered to be “talent factories.” One conclusion he drew was that virtually all of them had an insufficient pipeline of high-potential employees to fill strategic management roles.

Ready argued that even if a company’s practices and technical systems were robust and up to date, talent management will fail without deep-seated commitment from senior executives. Senior line executives may vigorously assert that obtaining and keeping the best people is a major priority—but then fail to act on their words. Other managers believed they could find talented employees by paying a premium (sound familiar) or by using the best executive recruiters (more familiar), while others are distracted by competing priorities.

Passion must start at the top and infuse the corporate culture; otherwise, the talent management processes can easily deteriorate into bureaucratic routines. But is passion enough? For SEC college football?

Ready provided a questionnaire to his companies and asked the responders to rate themselves. Let’s take a minute to answer some of these questions as if we were Nick Saban. The responses ranged from “We’re not doing well enough” at the low end, “We’re OK but not cheering” in the middle and “we’re at or near benchmark status” at the top. No joking. These were on the actual response line. Ok. Ready? You can answer these questions about your company if you want. I’ll be Nick Saban.

Question 1 – Do you know what skills your company needs to meet its growth objectives? Saban here is going to give himself a 10 for the primary reason that he explicitly understands the talents required to perform in each of his assistant positions. He has hired enough assistants and was an assistant for long enough to thoroughly understand.
Question 4 – Do you have a diverse and plentiful pool of leaders who are capable of moving into your organization’s most senior roles? Again, Saban is going to score a ten. One of the bonuses of winning five national championships is that you attract talent – top talent. Saban has exquisitely talented, young coaches and former players seeking him out for opportunities.

Question 7 – Do you offer managers developmental experiences specifically aimed at preparing them for the unique challenges of leading large organizations? Yes. Saban scores a ten. Even from the East German judge! Presently, there are 15 of Saban’s disciples who are in the position of head coach of a Division 1 college football team, or head coach of an NFL team. Many of his former employees compete against him every week.

Last one, number 9 – Have you as a leader unequivocally used words and deeds to demonstrate that you are fully committed to developing talent globally in your organization. I’m going to answer this one for Saban a different way. Alabama was ahead 28-0 in the national semi-final game last year. The co-offensive coordinator called a bad play on third down which resulted in Alabama needing to punt on 4th down. Twelve hours after the game, Saban was breaking the film down with his coaching staff and called out the coordinator for the mistake, using some very spicy Alabama words. The rub here is that the coordinator had accepted a job to become the head coach at the University of Maryland…three days earlier. Saban didn’t care. He was answering question number 9. Saban was fully committed to developing talent in the organization, even for talent that had already given their notice!

I am now going to give you my unscientific, non-peer reviewed, resilient leader theory on developing your talent. Are you ready? Got your pencils out? Here’s it is. I’ll buy – you fly. You heard it. I’ll buy – you fly. This theory has been endorsed by two licensed teenage drivers in my house.

The theory is simple here’s how it works. After my daughter, Haley, received her license, she was actively seeking ways to use the car. She wanted more responsibility – and specifically more responsibility with the car. As the parents in the audience will appreciate, give your kids the keys to the car and you may not see the teenager for a week, or until they need a meal. Haley earned our trust and I was willing to extend boundaries of control.
On Monday nights in the summer, Newport Creamery has a two-for-one special on milkshakes. Around here, they are called Awful Awfuls. Awful Awful Monday became a great way to transfer responsibility to my daughter. Hales, I’ll buy – you fly. “Chocolate for me, mint chocolate chip for your brother – go and see what your mother wants. Here’s ten bucks. And, I know how much change I should get back.”

Haley reveled in this responsibility. Quick show of hands how many of you as teenagers were on the receiving end of the “I’ll buy you fly” deal from your parents? My magic mirror shows me that….almost everyone has both hands up!

Developing responsibility in your children may not hold the same cache as for a Fortune 500 company or a perennial football powerhouse, but the mindset is the same. Building engagement. Fostering commitment. Ensuring accountability.

Saban puts it this way, “ I actually look for people who have goals and aspirations who are hard workers and very committed to what they do.” This epitomizes Haley. She was driven (bad pun intended) to make sure that we got our Awful Awful…before they melted. And, trust me heads were going to roll if the order got messed up in any way.
Let’s take a minute and go back to our opening question. Saban lost all his offensive coaches after national championship game last year. Saban sees the defections as a sign of his program’s success. He said, “I think if you look at most of the coming and going, it’s people getting better jobs.”

This is exactly what happened with Haley. She defected…well…she went to college. But while I was buying, she was flying! And like many good leaders who develop their assistants that leave for better opportunities, you have a rich talent pool to draw from. For me that was Max, my son, who was itching to take Haley’s spot on the buy & fly deal.

Make your company a talent factory, like the University of Alabama Crimson Tide Football team. Make your company a desirous place to work and you will find that the best talent seeks you out. If you are interested in Douglas Ready’s questionnaire you can find it on the podcast page on my brand new website. www.trenttheroux.com

Folks, thank you for listening to Swimming in the Flood. Resilient leaders face challenging currents and it is tough navigating, but with one tack or another we can get there together.
I will be giving a brand new speech in the Providence area on November 21st at the ON Leadership Conference being held at the Crowne Plaza. Search for ON Leadership Conference to view the speaker lineup and buy tickets.

25. Thank You Noted
Scroll to top