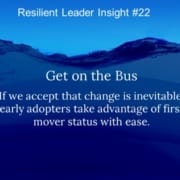 Have you ever joined a cult? No? Have you ever had a few youngsters rock up to you and talk about how beautiful the land was, how there was this special community down in the valley teeming with youths from our generation and how there was this really groovy leader who was almost like a mystic. Want to join? What if they there was an awesome soundtrack? No? What if you could earn stock options?
(Music) Welcome to Swimming in the Flood; a podcast where develop the resilient leader’s mindset by navigating difficult currents in business. My name is Trent Theroux.

Thousands of millennials head to Silicon Valley each year to find their path in the fastest moving cult on the planet. One of the preeminent leaders in the cult of personality was Steve Job, founder of Apple. Much has been written and filmed about Job’s leadership, meaning that many of us feel that we know him and his story quite well. I would argue that none of us really knew him at all. He was a mysterious mystic.

In an interview with UCLA Anderson School of Management professor Maia Young, she said that “the more you saw him as having mystique, the more it wend hand in hand as him being a visionary.” “When mysterious people are successful, we perceive them as if they have a special something endowed to them that most of us don’t have access to.” Young conducted a study in which subjects were asked to assess Job’s potential at predicting government spending, trends in the stock market, and the future of interest rates. The more people saw him as having mystique, the more they ascribed to him the ability to predict those things. It’s a testament to how much people saw in him.

Walking on water was not one of the questions of the survey, though I suspect that over 70% would have agreed that Jobs had that skill covered.

Is this my cheeky way of implying to the developing resilient leaders in the audience that you need to walk on water to gain the love and admiration of your employees and customers? Hardly, I suggest you all have the ability to swim, but we will leave the divine stuff for, well…the divine.

A large portion of what made the cult of Apple wasn’t Jobs, it was the cool products. A quick example…maybe a history lesson for some of you. When Apple launched the iPod in 2001, it wasn’t revolutionary. No. There were several other products that had a reasonable amount of memory capable of playing all the music in your CD collection. Apple wasn’t the first to market. However, Apple made the connection that music is cool and their product should be cool as well. Their redesign of the wheel-based interface changed a basic mp3 player into a listening experience. The old mp3 players required you to fast forward through each song to get to a song you wanted to hear. Apple’s wheel-based model allowed you to select which artists, which album, which song directly. Apple was brilliant in their marketing. Put 1,000 songs in your pocket. A marketing tagline that immediately let you understand the cult of product you were seeking.

One can argue that more people joined the Apple cult because of the products. Consumers wanted to be a part of something cool, hip, edgy. If the Walkman was your dad’s way of listening to music, the iPod was ours. Quick show of hands. How many of you belong to a cult? Hmmm…my magic mirror shows me that many of you are reluctant to raise your hands because YOU think the word has a negative connotation.

I want to go off on a tangent here. I have an intimate relationship with a cult. I never appreciated that it was a cult until I saw the look in some of the employee’s eyes when they talked about saving energy. The company is RISE Engineering and is based in Cranston. For the past 40 years they have been in the energy efficiency business. They go into homes and businesses and identify ways that the end user can reduce their electric consumption.

For a long time RISE was mainly in the business of upgrading light fixtures and replacement windows. However, over the past decade they have been on energy efficiency steroids. In that time they have hired people with a passion to save the world one home insulation project at a time. Reducing energy consumption is met by today’s youth as a clarion call to improve the planet. It’s hard for some older folks to think past “turn off the lights when you leave” as doing your part. These employees study how their work will impact the globe, how their efforts can be measured in terms of sustainability. It’s magnificent to watch and hear.

So, what can we learn as developing resilient leaders about cults? The employees at RISE are not coming to work for a paycheck, but rather a cause. It is the cause and the mission that drive talented people to work at RISE. It is the culture that has been built to foster employee growth and learning in the energy efficiency space that has helped it thrive and grow over the years. It feeds off itself. The employees feed off it and the customers feed from it as well.

I am now going to give you my unscientific, non-peer reviewed, resilient leader theory on joining a cult. Are you ready? Got your pencils out? Here’s it is. Get on the bus. You heard it. Get on the bus. This theory has been endorsed by 500,000 youths attending a music and art festival fifty years ago this week.
The theory is simple. Novelist and LSD experiment participant, Ken Kesey wrote “you are either on the bus or you are off the bus.” The Woodstock festival organizers were expecting a crowd up to 200,000. This was a business venture for them. They put up their own money for the acts and sound and stages and marketing. But something happened along the way.

The counter-culture of the 1960s was reaching a tipping point. Hippies once derided by their straight laced parents were now labeled “The Woodstock Generation.” The 200,000 planned swelled to a half a million. Hippies knew that something special was happening, something they wanted to be a part of, something worth getting the bus for. And, that’s exactly what happened. (Play Woodstock)

As my good friend the Reverend Jim Ignatowski once said after he learned that there were a half a million people at Woodstock, “It was a good thing that I was at Woodstock. Otherwise, there would have been four hundred ninety-nine thousand. And ninety nine hundred and nine nine people there.

Folks, thank you for listening to Swimming in the Flood. Resilient leaders face challenging currents and it is tough navigating, but with one tack or another we can get there together. You can find more podcasts and videos on my website at www.trenttheroux.com. If you enjoyed today’s show, please tell a friend, share the link on your social network…subscribe. Can I help your company talk about adopting culture? Just write to me at
info@trenttheroux.com and let me understand the items you are seeking to strengthen. Thanks again for listening. I look forward to getting together next week.

23. Cabin In The Woods
Scroll to top